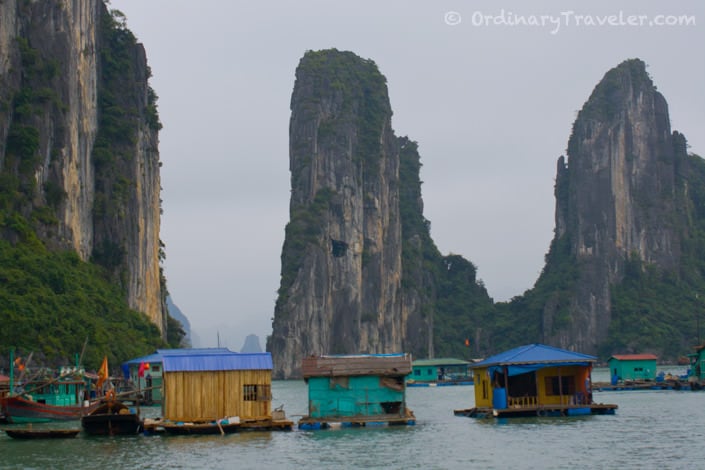 Our Northern Vietnam Travel Guide provides tips for where to stay and things to do in Hanoi, Ha Long Bay and Cat Ba Island!

Vietnam, for us, was a long awaited and highly anticipated visit to a country where so many people either love it or hate it. I, for one, can finally say… I love it! Maybe it was just good luck and we encountered friendly people, but we both found the natives of this country to be not only helpful, but also exuding a great sense of humor.

Our first three days in Northern Vietnam were a whirlwind. From the moment we stepped foot into Hanoi, everything accelerated at a speed ten times faster than Laos, especially the traffic!

We spent our first night in search of a decent hotel and an honest tour company to book a trip to Ha Long Bay. Mind you, this was all during one of the biggest holidays in Vietnam. April 30th is Liberation Day and May 1st is Labor Day. In other words, all the workers got three days off and many of them decided to spend it in Ha Long Bay.

Our choice was to either skip the 1553 square km of the gorgeous Ha Long Bay altogether or buy an overpriced ticket on an extremely busy weekend. After our experience, I’m thinking it may have been better to avoid the chaos and go to Ninh Binh instead. However, at the time, we thought, “How bad can it be?”

Finally, by about 11 in the evening, we had our tour booked for 7 am the next morning. The tour operator shifted us around so many times that we really had no idea what to expect for this 3 day, 2 night tour. While heading across the busy street to finally get some dinner, I was struck by a motorbike that neither of us saw coming. You have heard people say that at the moment right before an accident they have the sensation of time moving in slow motion, right?

Well, that is exactly what happened to me as I saw the motorbike inching closer from the corner of my eye. However, even though time appeared to be moving in slow motion, I was not able to react any faster than usual. I actually felt like the only thing my body was able to do was freeze where I was standing and prepare for the impact.

I am thankful he stopped just in time to only slam into my arm. Gratefully, I walked away with nothing but a few bruises and a justified fear of crossing the street in Vietnam cities. We got some food just before the restaurants closed and went back to our room at the lovely Tung Trang Hotel we found for $15/night. 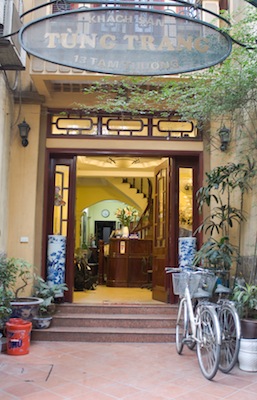 The Tung Trang Hotel in the Old Quarter of Hanoi is owned by a gracious Vietnamese family. Our short stay here was extremely comfortable. The room was one of the nicest we had stayed at since Kata Beach.

We enjoyed a private balcony that overlooked a quiet ally, free internet, and in the morning they cooked us breakfast in a cozy kitchen that reminded me of home. Our intention was to stay in Hanoi another night, but because of the holiday, our only chance to see the amazing limestone mountains of Ha Long Bay was leaving on a tour the very next day. 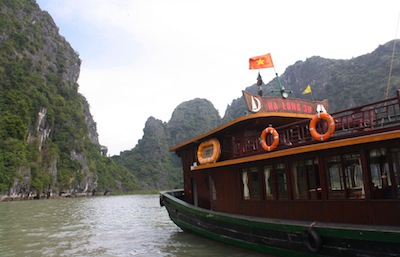 It takes about 3 hours to get to Ha Long City from Hanoi by bus. I still haven’t gotten used to the way the Vietnamese seem to drive on both sides of the road. I’m beginning to wonder if they have any traffic laws. If they do, it seems nobody abides by them anyway.

Our tour guide informed us there are more than 3 million motorbikes in Hanoi and probably double that amount in Saigon! Despite the crazy traffic, and driving on both sides of the road, we managed to get there in one piece. Upon arrival at the harbor is when we first realized how insanely crowded this trip was going to be. Tien, our tour guide, told us all to wait 30 minutes while he got our tickets.

An hour and a half had passed before tour guide led us through the crowd and onto our boat. In order to get to our boat we had to climb through 2 other boats since they were packed about 4 boats deep into the harbor. Each time I jumped from one boat to the other, I prayed I would not fall in the water with all my camera gear. 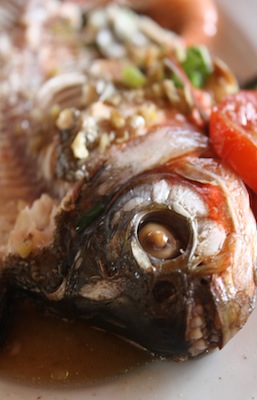 About 40 of us crammed into the dining area of the wooden boat and wondered when we would get to eat since it was already about 2 in the afternoon. Luckily we didn’t have to wait long for them to begin serving what I found out later to be the same meal we would eat for the next 3 days. Rice, steamed watercress, calamari, coleslaw, and fish — with the bone, eyes and teeth still attached — were all brought to our tables to eat communal style.

For me, eating communal style with only chopsticks at hand was great. Eating only fish as my protein was not. Needless to say, I ate a lot of rice for the next 3 days and left the boat a few pounds lighter.

After lunch, they unloaded everyone on shore to view a huge cave with many dripstones, some of which resembled animals or people. The cave was interesting, but it felt a bit artificial with the concrete walkways and the colorful lights that covered almost every inch of the huge cavern. It was nothing like the all-natural caves we experienced in Laos.

After viewing the cave, we continued touring the beautiful bay and soaked in the sights while we relaxed on the upper deck of the boat. We had no idea where they were taking us next or when, which became the norm for the whole trip. We just had to go with the flow no matter what they threw at us.

Our next surprise was staying the night on Cat Ba Island. I imagined a relaxing, remote island where we could drink beers and chill on the beach. It seemed remote enough as our bus swerved around corners on a small road with infinite views of nature on both sides. A bit further up the road we began to see advertisement signs for soon-to-be-built luxury hotels along the water. Before I knew it, we were in bumper to bumper traffic in a city full of honking horns.

Scott and I both thought this couldn’t possibly be where we are staying the night. I hoped this was only where they were dropping off the couple of passengers who were not on the same tour as us.

They began calling out names. They couldn’t remember all of our names so they called us by our nationality. And then it came… “You! Americans! Come!” Ugh! We reluctantly gathered our bags and stepped onto the loud, busy sidewalk, amidst all the honking horns. Looks like we didn’t leave the Hanoi traffic behind!

Our hotel that night was nothing like our beloved Tung Trang in Hanoi. I’m not a big fan of rooms with no windows, but at least it had TV and was somewhat clean. Since we had left the harbor late, we only had enough time to set down our bags before we had to be back downstairs for the dinner they would serve in the dining area. We ate with a couple of guys from Chile and shared a few laughs about how the food was probably just the leftovers from lunch.

We were exhausted from a day full of crowds, so we headed back to our room early because we also knew the tour’s strict schedule required us to be downstairs for breakfast at 7am. We got up early the next morning and arrived downstairs a little before 7.

We had a new tour guide, unbeknownst to us, who informed us the bus was waiting to leave for the Cat Ba National Park hike and we needed to get on NOW! So much for breakfast at 7! We scarfed down our food and quickly got on the bus with our fellow tourists who seemingly knew to arrive downstairs earlier than 7.

When I realized we were still waiting for someone else and also became aware of the fact that we were indeed about to go on a hike in flip flops, I ran upstairs to get sneakers for the both of us. That was our saving grace for what came next.

The 3 hour hike in Cat Ba National Park was not what any of us expected. Especially those tourists who came wearing flip flops and high heels. Our group decided to take the “tougher” route up, therefore we were slipping through mud and scaling up the side of the mountain.

The view at the top is spectacular, but don’t stay too long because the way down is the same way you came up and it’s only big enough for one person. You will have to wait for the mass of tourists trying to get to the top, which is only a small area and it was definitely at its max capacity by the time we were trying to get back down. It may have been easier if we spoke Vietnamese so that we could have communicated this to the impatient people trying to come up.

Everyone in our group was sufficiently exhausted by the time we got back down the mountain and we all looked forward to relaxing for our remaining time on Cat Ba Island. But, not surprisingly, the moment we got back to the hotel we were told we needed to check out of our rooms and we had three hours of free time to enjoy the honking horns in the traffic-filled city of Cat Ba. 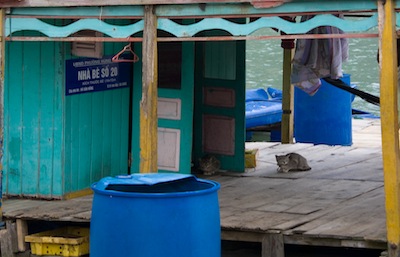 This was probably the longest 3 hours of our entire trip considering we had no desire to come to this island in the first place and as far as we could see, there was nothing here that we cared to see.

When the torture of spending hours in the loud city was over, we excitedly got on the bus to be taken back to the harbor for our night on a boat that would be cruising the waters of Ha Long. Our stay on the boat was well worth putting ourselves through the previous 30 hours.

The only complaint we had was that our tour guides mixed up our passports with another couple on a different boat. (When you stay the night somewhere in Vietnam, they take your passports and only give them back to you at check out.) Upon checking out of our room is when they tried to give us passports from Belgium. Luckily we noticed they were not ours and the crew was able to track down our passports a few hours later.

The moral of the story is…

Don’t go to Ha Long Bay during a Vietnamese holiday. If given the choice again, we would have chosen to go somewhere less crowded, such as Sapa or Ninh Binh.

Best Luggage Brands (And Tips For Choosing The Right One)