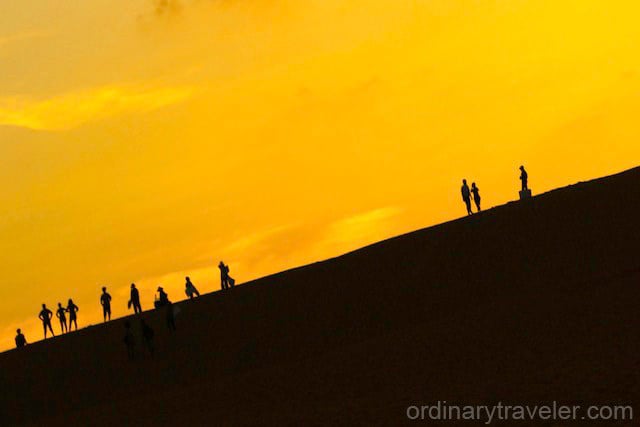 This Mui Ne travel guide covers all of the essentials — where to eat, the best things to do, where to stay, how to get there and more!

Since we had already experienced the trains in Vietnam on our journey to China Beach, we decided to take the more adventurous route of a sleeper bus as our transportation to Mui Ne.

These buses are nothing like the sleeper buses in Thailand. The seats are actually beds, instead of seats that recline. It was surprisingly comfortable as long as you don’t let your mind wonder how many people have slept on your bed without any sheets.

The 16 hour bus ride flew by for us and was actually cheaper and faster than taking the train. Just to be clear, these beds are not made for exceptionally tall people. If you are 5’6 or shorter, you will sleep fine in one of the beds. However, if you are taller than that, you may feel a bit cramped unless you are lucky enough to get a bus that is not crowded so you can stretch out on two beds.

Also, if you are a light sleeper you may be constantly abruptly awoken by the sound of loud horns or the shaking of the bus as it speeds over bumpy, unfinished roads. This is all a part of the adventure though, right!? 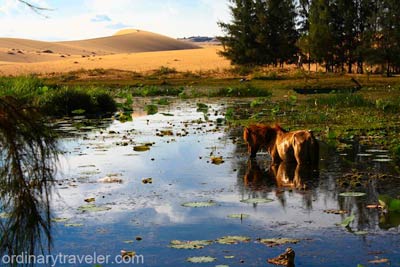 I’m not going to lie, after the 16 hour bus ride we were a bit tired and grumpy by the time we arrived in Mui Ne. We had picked out a couple of hotels from our guide book, but we found out soon enough that Mui Ne is not easy to get around by foot especially when you are walking with heavy bags at the hottest part of the day.

We also discovered, amidst being covered with buckets of our own sweat, that Mui Ne is mostly for families who come to enjoy the beach and are ready to drop some cash, or credit cards in this case.

There are a few accommodation options for backpackers, but we found out later that they are on the Southern end of the town where most of the locals live. This is normally where we would have stayed, and without complaint, but since these were our last 2 days of a 6 week trip, we decided to keep the theme from Hoi An going and get a place with a pool. The hotels with pools started at about $40/night because many of them are right on the beach.

We were drawn to a lovely resort named Tien Dat because of it’s inviting pool overlooking the ocean, complete with kiddie slides and a waterfall. It was fairly quiet and several times we managed to have the pool all to ourselves. The $40/night included a delectable buffet breakfast that included crossing guards who stopped traffic for guests to get to and from the restaurant in the morning. I certainly could have used these crossing guards in Hanoi!

Where to Eat in Mui Ne

There are quite a few impressive bars along the strip of Mui Ne, some with pools that light up at night. If you are looking for exotic nightlife, you will definitely find it here. You can walk along the strip of resorts and find little jewels of clubs and restaurants that make you feel like you are in the fanciest club in New York or Los Angeles.

Our personal favorite is a bar/restaurant named Jibe’s. This place has it all. Kitesurfing rentals, a pool table, a cushy bar, and couches with tables to enjoy some of their delectable cuisines while listening to the sounds of the ocean. 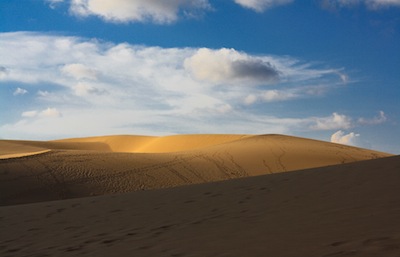 Another of our preferred restaurants was just a few steps away from our resort. It was called, “The Most Popular Restaurant”, and for good reason. Very inexpensive American, Thai and Vietnamese cuisine that included banana pancakes to die for, fried chicken, fruit shakes, fried noodles, cheap Vietnamese beer and, of course, a view of the sand and serene, blue ocean.

One word of caution while trying out different budget restaurants in Mui Ne. We went to a little place not far from our resort and ordered a hamburger. After the food came I cut it in half and noticed the meat looked a little mushy, almost the consistency of an uncooked veggie burger.

We sent it back, thinking it just needed more time on the grill, and asked them to cook it longer. It came back and after each of us took one bite, we knew something was off. The meat still appeared to be doughy and cooking it longer did not change the taste or the consistency. I suggested we did not eat anymore of it just in case it would make us sick.

At first I thought it was just beef that had been sitting around too long, but afterward I realized it might have actually been some kind of mystery meat. Either dog, rat, cat… who knows! 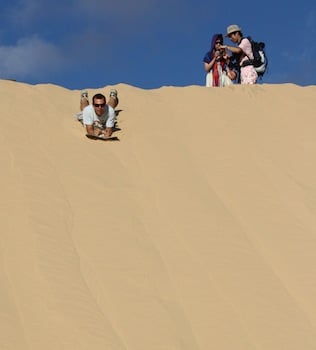 Now it was time to take a tour to the legendary Mui Ne Sand Dunes. We booked a tour for $10 each through Sinh Cafe, a honest tour company that is very popular with travelers all over Vietnam. They picked us up in a mini-bus with about 8 other tourists.

Our first stop was the Phan Thiet fishing village where we took pictures of the colorful boats, while holding our noses to avoid the overwhelming smell of rotten fish. Our second stop was the Yellow Sand Dunes and White Lake about 1/2 hours drive, where you can rent home-made plastic sand sleds from the local kids and slide down the mounds of sand. The shallower ends of the lake are covered in stunning lotuses and the entire scene is picturesque. Last stop, after you are sufficiently tired, is the White Sand Dunes where you watch the sun set over the sand.

Bus from Mui Ne to Saigon

After relaxing and playing in the pool for two days in Mui Ne, we were finally ready to head to Saigon to catch our midnight flight into Narita, Japan. The easiest option to get to Saigon was the bus that departed at 1 pm from our hotel, which we also booked through Sinh Cafe.

We spent most of the ride with our noses in our books, until our bus suddenly skidded to a halt that sent the passengers flying into the seat in front of them. We could smell burning rubber and since we were at the very back of the bus we were able to look behind us to see what all the commotion was about. All we could see was a girl laying on the ground with her motorbike on top of her. It looked as if she had no legs. I started to panic that our bus had run over her legs! 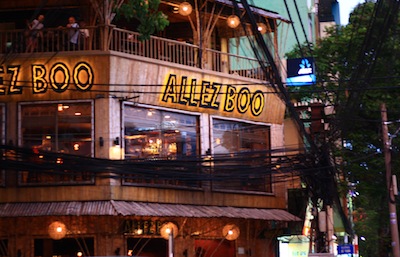 After what seemed like an eternity, she slowly got up from the street and it appeared that she was not injured, just very shocked. Our bus driver got out and I thought for sure he wanted to ask her if she was okay. To our surprise, he began yelling at her and at another motorbike driver. The yelling went on back and forth for about 5 minutes in Vietnamese. I cringed at the possibility of our bus driver being overtaken by the crowd that was quickly forming.

Finally, our bus driver turned around and got back on the bus, leaving the screaming crowd and injured behind. I couldn’t shake that scene from my mind the rest of the bus ride, and the outcome for me was realizing how lucky I am to live in a place where people seem to care when they hit someone on the road.

Saigon was a short visit, just long enough to get a bite to eat and walk around the crowded street near Sinh Cafe. Around 8 pm, we caught a taxi to the airport and got ready for the next 30 hours to be filled with 2 flights, a layover in Japan, a bus, a train and a taxi, to finally be home in our bed.