Ordinary Traveler / Blog / Travel Thoughts / The TSA: Protecting Us From Snow Globes with X-Rays and Pat-Downs 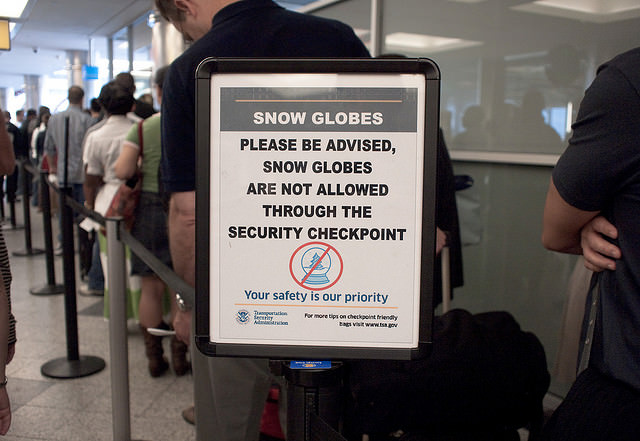 Yes it’s true the TSA banned those lovable snow globes. They are just too much of a risk to national security with their white snowy flakes and their undocumented liquid inside. The TSA has a full list of Prohibited Items on their website in case you need to check before a flight. Moving on…

The TSA: Protecting Us From Snow Globes with X-Rays and Pat-Downs

As many of you know, the TSA has recently rolled out their new x-ray machines, or as some people like to call them: “nude-o-scanners”. For those of you who don’t know, you probably never travel, or you’re the kind of person that is just hearing about this new thingy that was also recently rolled out, called the cell phone. The scanners are not in every airport yet, so here’s a list of airports where they are located in case you want to check.

For those of you who missed the announcement about the new scanners, here it is below. Warning!! It is possible you may experience the thought: “This goofball is responsible for my safety?” as you watch this video. Scary I know!

I know there are a few misconceptions about the new scanners. As usual, when the TSA tries to inform the public, they just end up just confusing everyone. Not everyone has to go through the x-ray machine. They randomly select people to go through the machine. Most people will just go through the regular metal detectors.

Would I go through? Not a chance! I’d much rather have the TSA molest me and feel my junk than worry about the health risk of another x-ray being taken of me.

Here are the arguments for and against the scanners with concerns to health risks:

The TSA claims, “Each full body scan produces less than 10 microREM of emission, the equivalent to the exposure each person receives in about 2 minutes of an airplane flight at altitude.” Found in the TSA FAQ

The ACLU (American Civil Liberties Union) has cited a letter describing, the dose of radiation emitted from x-rays to passengers: “the dose would be safe if it were distributed throughout the volume of the entire body, the dose to the skin may be dangerously high”. It seems the x-ray is directed at the skin only which makes the concentration of the dose to be higher. Avoiding possible health risks by not using the new scanner is enough for me to opt out from using it, but to be thorough, let’s take a look at the privacy concerns.

Personally I don’t really care about the so-called nudy pictures of me, for a couple reasons. One, I don’t care if someone sees me naked. Two, I don’t think the images are that revealing, but you can judge for yourself. Here is an example of the image that the machine produces: 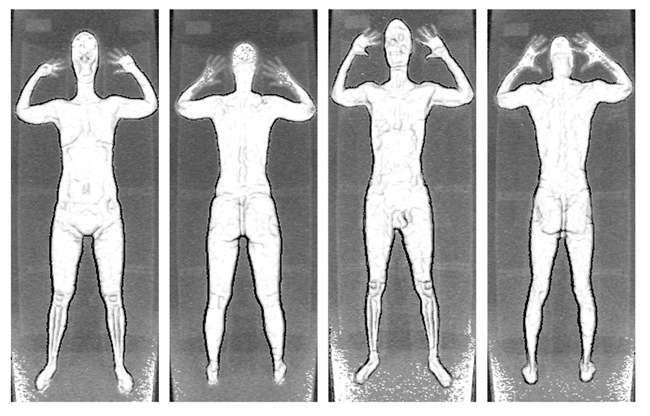 Damn sexy, right? Please try to contain yourself and read on…

Am I worried about the TSA saving these images? Well, yes and no. There was a story not too long ago about some US Marshalls that saved images from a security point at a courthouse in Florida using the same scanner. So yes, it’s true that these images can be saved, but according to the TSA the machines are delivered with the option to save the images disabled.

The question is does that mean it can be turned on at any time? I would say most likely yes, and you never know when the TSA is going to change their mind without telling us. Not to mention how easily the government can confuse data. I wouldn’t trust the government to store my lunch order correctly, let alone possess anything important to me.

I have to ask this question: Do we really need the TSA? Well, the fact remains that the TSA has never stopped any terrorist attack from happening according to a CBS news report.

That’s right, they have scored a goose egg so far. That isn’t to say that I don’t believe that we need some type of security in airports. I mean, we don’t want to just make it easy for anyone to bring weapons or explosives on a plane.

I saw a TSA agent once throw out six kinds of cologne from a passenger, including a BIG bottle of polo sport, for being over the 3.4 oz limit. Let’s be honest, the TSA really saved the day on that one, and you know what I mean if you’ve ever sat next to the guy wearing too much cologne. To be frank, polo sport smells like crap anyway. In reality, the passenger had someone do him a huge favor. I would have done the same thing if I ever had a chance to throw out some polo sport.

After writing most of this article, I wondered when I would finally see one of these machines in action. On Christmas Eve, Christy and I were heading to the Dominican Republic. I looked ahead in the security line, and recognized the x-ray machine. I thought to myself, oh it would be so much easier to just walk through it, but then I realized I was being lazy. So I decided to stand by my original decision earlier in this article. I was a little nervous to opt out of the scanner because I know the TSA REALLY encourages people to go through the machine.

To my surprise, the man said, “Ok, no problem.” From everything that I had heard, it was going to be an extremely intrusive experience. All the news stories talk about inexperienced TSA officers groping individuals and people walking through the airport half naked. I guess I should stop getting my news from SNL.

Ok lets be serious. When I went for the pat-down, the TSA officer was really professional. He explained exactly where he was going to put his hands before he did anything. There was no groping. The only part that was a little embarrassing was the point where the officer told me to hold my arms out. Of course, being the dope that I am, I held my arms up like a criminal. The officer looked at me cockeyed and said, “Sir you’re not getting arrested. Please hold your hands out, and not up.” The rest of the process was painless. Leave it to the news to blow crap out of proportion.

What do you think about the new TSA scanners? Have you been through one?

(the cover photo was provided by: Richard Boenigk)

20 Best Travel Hacks That Will Save You Money