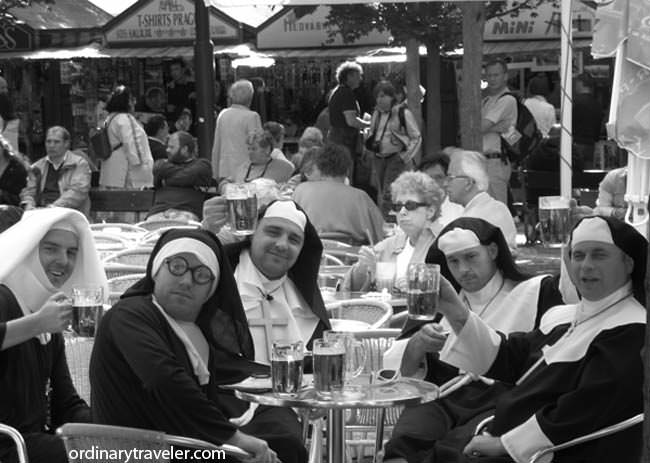 I happened upon these “nuns” while exploring the streets of Prague. They noticed I was snapping a picture, so they turned to me and raised their glasses! Gotta love Prague!

Photo of the Week: Drunk Nuns in Prague

Things to Do in Prague

One of Prague’s best-known landmarks, Prague Castle is the world’s largest ancient castle, and full of gargoyles, arches, and spires. While at Prague Castle, definitely take a tour of St. Vitus Cathedral, go for a walk in the lush gardens surrounding it, have a glass of wine at the vineyard nearby, and take in the beautiful views!

A square surrounded by dramatic 14th-century Gothic buildings, Old Town Square is one of the few European squares that survived WWII. At the crux of the square you’ll find the Old Town Hall Tower — characterized by the famous Astronomical Clock.

The John Lennon Wall in Prague is as much an homage to the Beatle as it is to Prague’s Velvet Revolution. The wall began in the 1980’s, when students would often cover it in graffiti as an act of defiance against the government. Despite officials painting over the wall and setting up security, the graffiti persisted and the wall became a symbol of free speech.

Today, the wall is covered with colorful drawings and well-wishes. You may even find a musician or two in the area!

Not only is Prague known for its locally made wine and absinthe, but the city is also known for its beer (or, Pivo), and the Czech Republic as a whole has one of the highest beer consumptions in the world. My advice is to find some music by the river (there are always bands playing in the summertime), order a glass, sit back and enjoy.

Charles Bridge, connecting Old Prague to Mala Strana, crosses over the Vltava River and is one of the most famous sites in the city. Sure, the bridge can get crowded, but taking in the views of the city, gazing at the statues, and buying trinkets from the vendors never gets old. For even more grandeur, come to Charles Bridge at sunset, the sky turns a million different colors behind Prague Castle and St. Vitus — it’s beautiful!

Check out our Photography page to purchase postcards and prints of our photos!

The Best Travel Backpacks For Every Budget

Previous Post: « Koh Phangan – It’s More Than Just a Party Island
Next Post: Budget Tips for Taking a Surf Trip Along The East Coast of Australia »