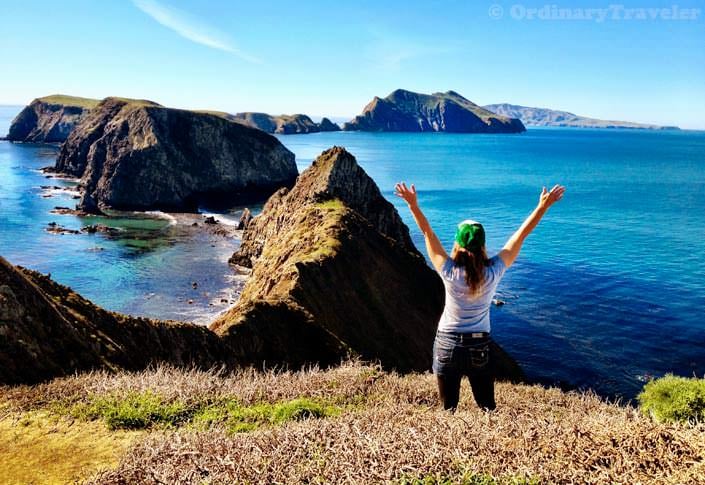 “We just got word that a pod of transient Orcas are attacking a California Gray Whale, so we are heading that way to see if we can get a closer look.”

It takes a moment for the Captain’s voice to register, but the gasps coming from outside immediately bring me to my senses. I grab my camera and rush to find a spot along the railing of our tour boat to get a closer look.

The thought of watching a majestic and peaceful Gray Whale get attacked by a pod of Orcas makes my stomach churn, but it’s almost like a car crash — you just can’t look away. 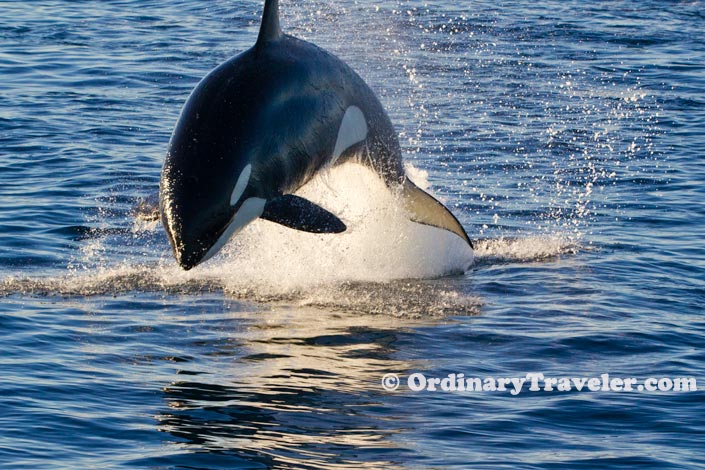 I’ve been fascinated by Orcas for as long as I can remember, so to be able to see these beauties in the wild is a dream come true for me. In the words of our captain, “What you are about to witness may seem brutal and cruel, but it’s nature — and in order to learn about these creatures, we often have to witness the bad with the good.” 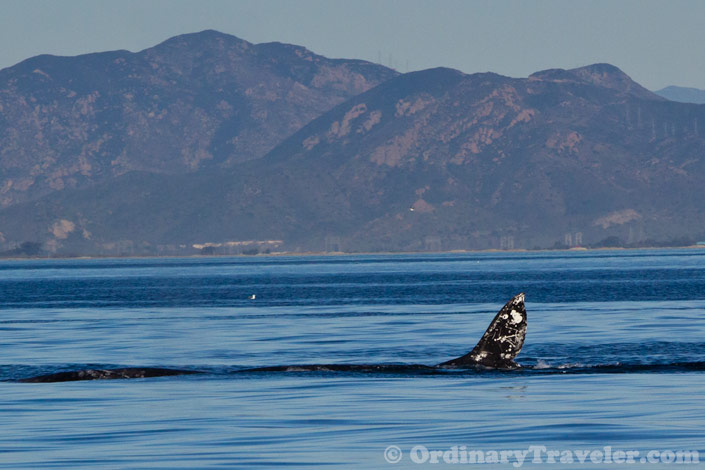 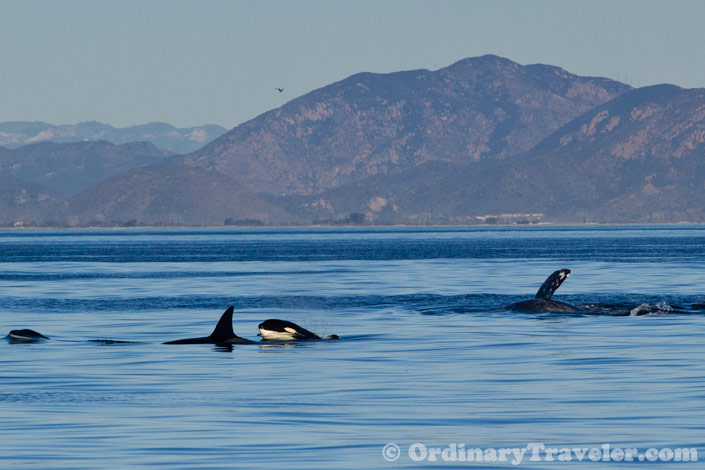 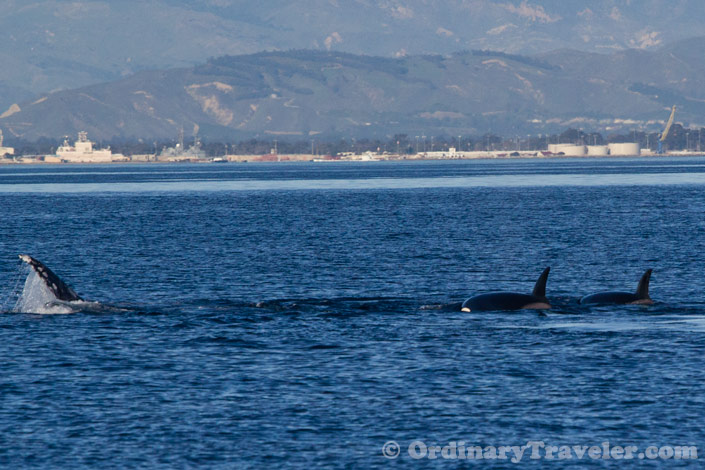 Orcas are actually part of the dolphin family and have been given the name “Killer Whale” because they have been known to kill whales. So infamous for these deeds, the Spanish nicknamed them “ballena asesina” meaning “assassin whale.”

As a knowledgeable crew member from Island Packers continues to narrate the scene, we all watch in awe as we witness this extremely rare attack. In thirty-five years of providing whale watching tours off the coast of Oxnard, not a single member of the crew has ever witnessed an event like this. Only a few people in the world have and even fewer have filmed it.

“It looks like there are three Orcas and three Gray Whales in the mix. The Grays are staying as close together as possible as they swim toward shallow water — which is imperative for their survival. If the Orcas are able to separate them, then they have a better chance of drowning the young whale.” 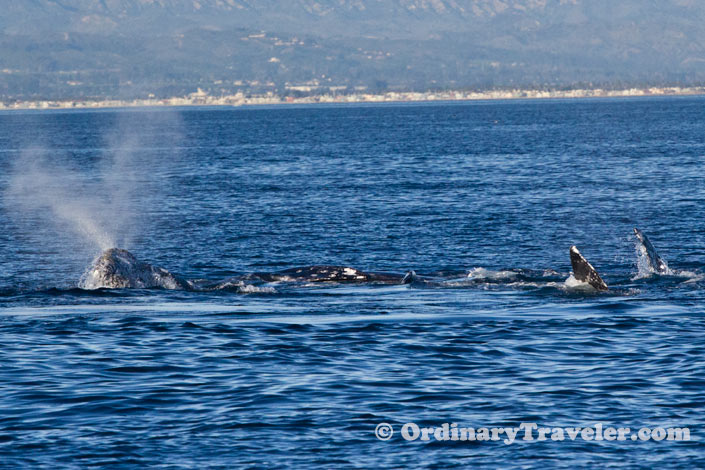 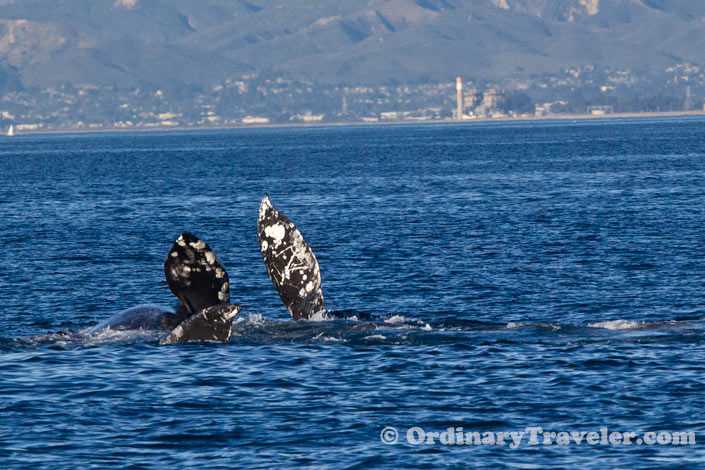 “The Orcas will ram them from all sides and can often do internal damage this way. The Gray Whales are vulnerable in deep water — where the Orcas can use the water depth to get enough speed to injure the Grays.”

The Gray Whales are not giving up without a fight. They use their fins to smack the Orcas and prevent them from succeeding in pulling them apart. You can’t see what is going on under the water, but just one swipe from a Gray’s tail could be fatal for an Orca, so the Killer Whales have to play their cards carefully.

An Underwater Glimpse of How Orcas Attack

“You can tell the Gray Whales are starting to get tired, which is exactly what the Orcas want.”

We watch as the Orcas get on top of the Gray Whales in an attempt to minimize their breaths and tire them out even more. Orca hunting techniques are passed down from adult to baby and often these attacks are training for the little ones. 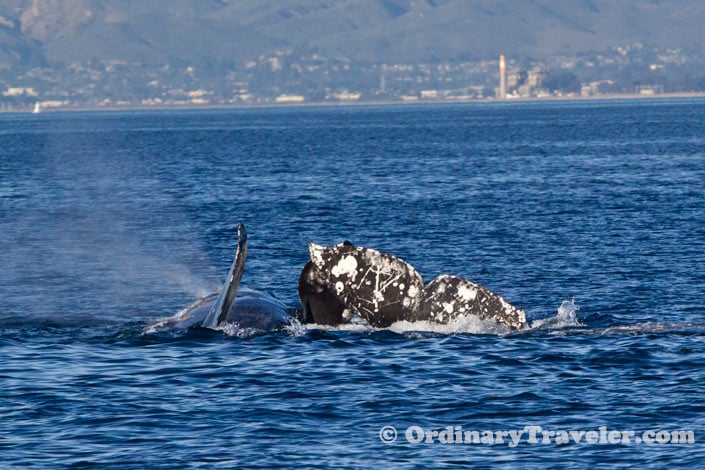 “It seems these Orcas don’t stand a very good chance of taking down the calf because there are three Grays and three Orcas. However, there could be more members of this Orca pod nearby.” 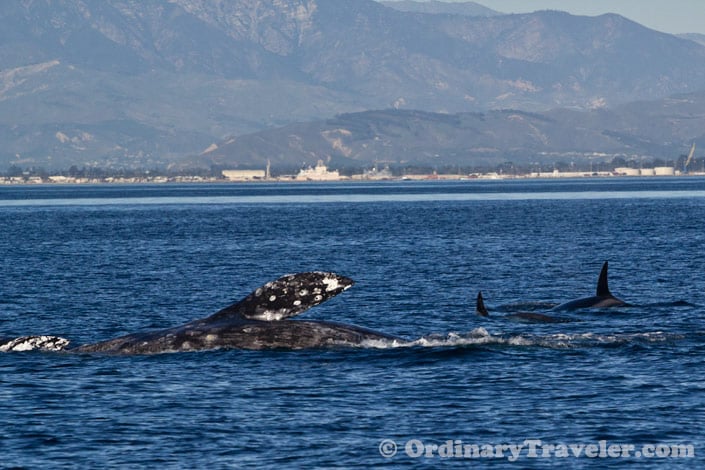 After about a thirty minute battle, we see the Orcas change course and all three of them head toward our boat — side by side — in perfect formation. At the last moment, they turn belly up and pass underneath us.

The Gray Whales have won this battle for the time being and continue their way toward the safety of the coast.

We turn our attention to the Orcas who can be extremely hard to track — but luckily we have the help of a helicopter. They surface again near our boat and play around on top of the water almost as if they are putting on a show for us. 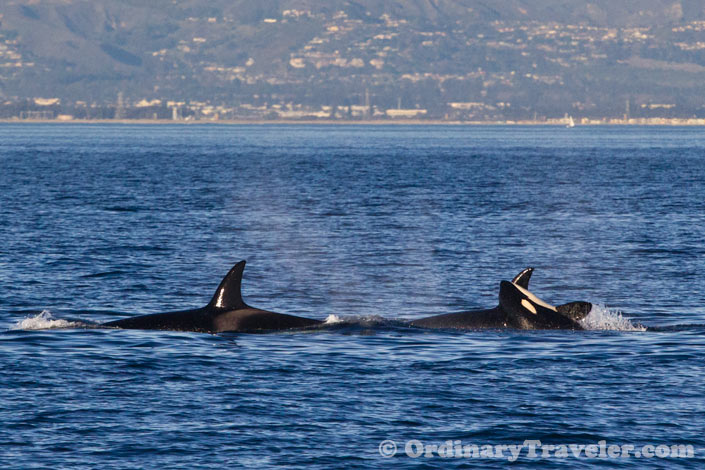 We lose sight of the Orcas again, but not too long after, we notice a huge pod of dolphins headed our way — looking to play in the wake of our boat.

You can feel the tension in the air as the Island Packers crew remind us that Orcas often use the noise of boat motors to surprise their prey.

These dolphins seem completely unaware of the Orcas presence and continue to play around our boat, even after the motor has been turned off.

The suspense thickens as we all watch and wait, hoping the dolphins will realize they are being hunted and flee the area.

Read Part II — When Orcas Attack — where we share the unexpected events we witnessed next!

A special thanks to the Oxnard Convention & Visitors Bureau for planning our tour with Island Packers and making this amazing experience possible.

What to Pack for a Trip to Iceland

The Best Cameras for Hiking and Backpacking

The Best Travel Shoes For Women – Tested By Travel Pros!