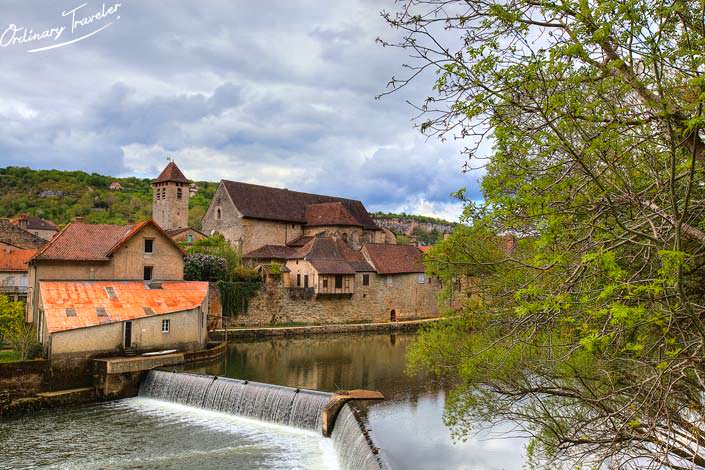 After my visit to Saint-Cirq-Lapopie, I was pretty sure I had found the most beautiful village in France… but like any inquisitive traveler, I still had more exploring to do before I made my final decision.

The next morning, I headed east to a restaurant in Marcilhac sur Cele on country roads that put the windy mountain roads back home in Northern California to shame.

To say they were tiny would be an understatement.

At times, I wasn’t sure if I was headed remotely in the right direction. I was told it would take an hour and a half, but after two hours passed, there was still no town to be seen. 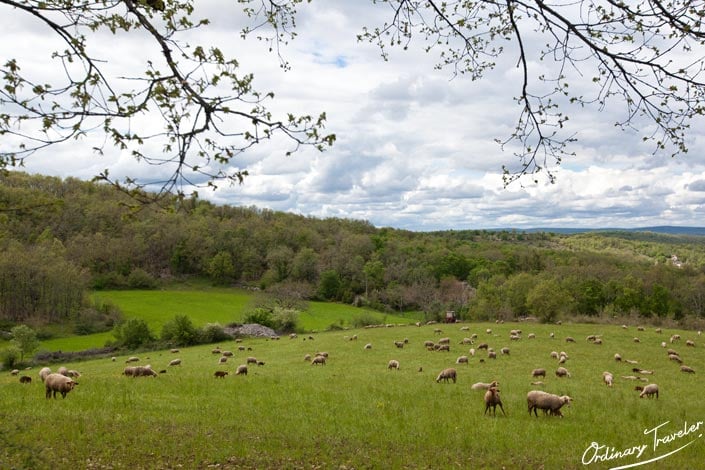 “This is rural France,” I reminded myself. My only concern was running out of gas before I could find some form of civilization besides the occasional farm house or sheep field.

A little over two hours into the drive, the GPS spoke. “You have reached your destination.”

Okay, great. There is not a building in sight. As I tried to push away anxious thoughts, I realized the logical thing to do is continue driving in the same direction and hope the GPS gets back on track.

Another ten minutes passed before I finally reached a tiny town — literally in the middle of nowhere. I looked for the name of the restaurant, “Les Touristes,” and noticed a sign with the words, “Des Touristes.” Close enough! 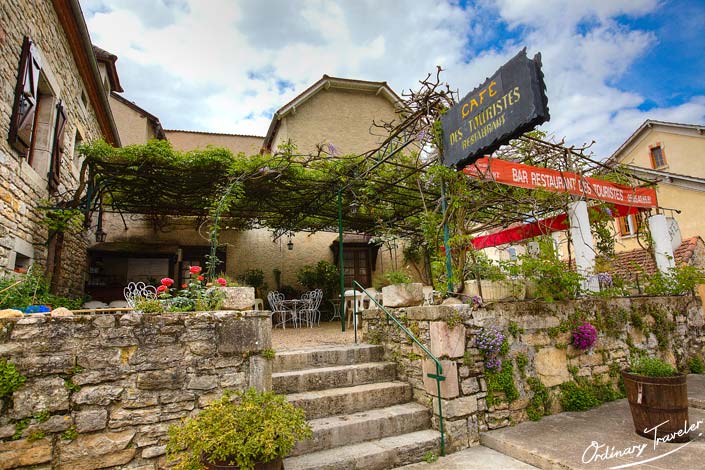 The restaurant looked closed, so I approached the only open door I could find — the kitchen. The cooks didn’t speak English, but pointed in the direction of another door, through the kitchen.

What followed next was one of those unique travel experiences which you won’t find in a guidebook.

I sat down at a table in the corner and was relieved to see several other hungry patrons, chatting and enjoying their meals. An animated young woman greeted me and confirmed I had found the correct place. She told me her parents owned the restaurant and they have been serving fresh, home-cooked meals for decades.

She began bringing dishes brimming with food to the table, leaving them for me to serve myself a portion and coming back later to retrieve the plates to carry to another table. It really did feel like all the people in the restaurant were cherished guests in their home.

There is no menu, which I absolutely loved. Her parents — Pierrette and Claude — serve only what is in season. However, they will cater to vegetarians as long as they have the ingredients in the kitchen.

I’m a fairly picky eater — meaning I rarely eat things like the liver, heart or brains of an animal — so when the first dish came to the table, I knew I had to throw my inhibitions to the wind. It looked like pâté baked into a mold and I was told it was made with all different parts of the chicken. It was extremely flavorful, mixed with seasonings and garlic, and I was shocked that I actually loved this appetizer!

I ate until I was full and then ate some more because I didn’t want to be rude — which was typical of my entire week in France. I devoured white asparagus with a delicious vinegar sauce, local lamb with mushrooms and a thin brown sauce, cauliflower au gratin, chips, local goat cheese, and a pancake topped with sugar for dessert (normally crepes with apple filling but they were out of apples).

The young woman asked where I had been in the Lot Valley. When I told her of my love for Saint-Cirq-Lapopie, she grinned and said, “If you think that village is beautiful, then you should see Conques — it is even more beautiful than Saint-Cirq-Lapopie.”

Well that is convenient because according to my itinerary, I would be visiting Conques later that day! Stay tuned for my take on Conques, France.

If you are in the Lot Valley area and would like to try Des Touristes, keep in mind that they are open from early May to mid-October and a reservation is recommended.

I highly suggest taking a look around Marcilhac sur Cele after your meal. It’s full of history and gorgeous scenery. 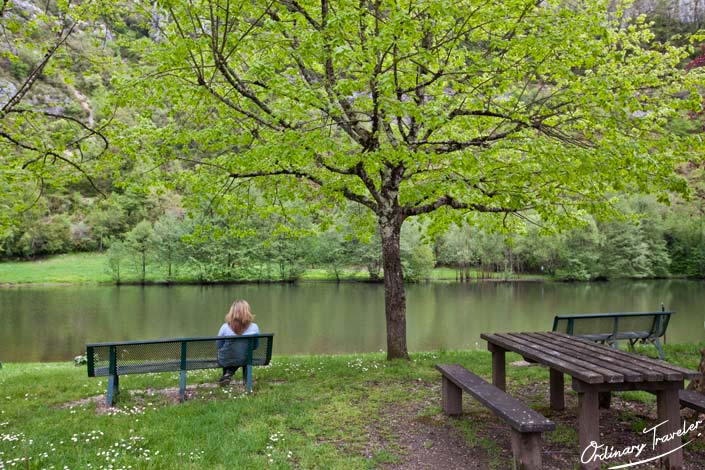 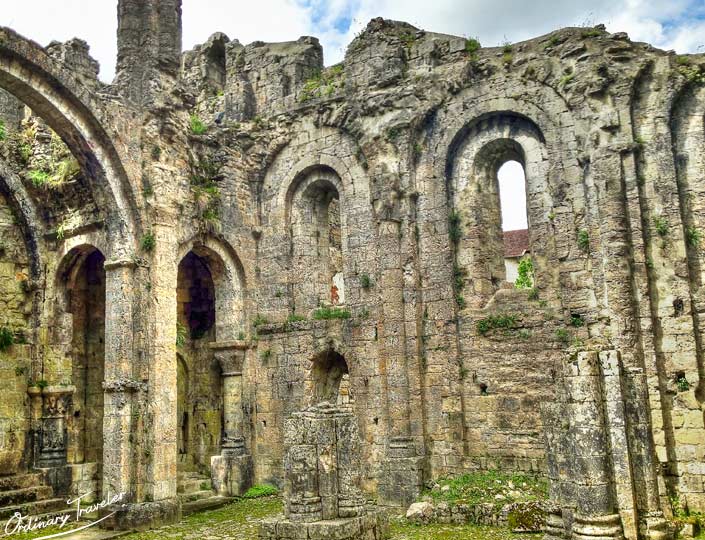 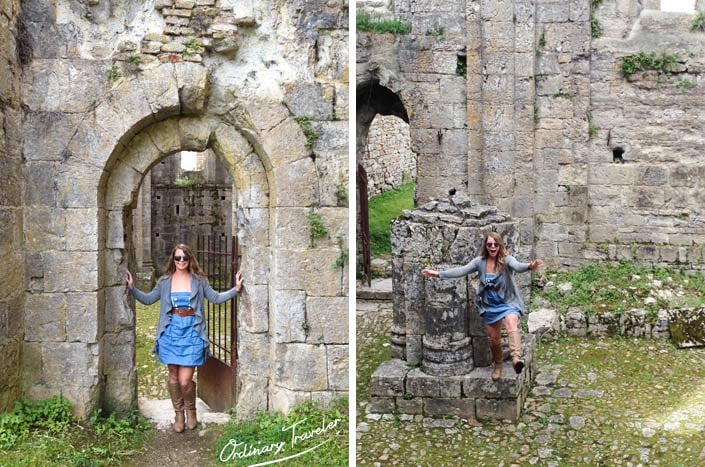 Church Ruins in Marcilhac sur Cele
Thanks to the Entente Vallée du Lot and Lot Tourisme for hosting my trip to the Lot Valley, France. As always, all opinions are my own.

Previous Post: « Saint-Cirq-Lapopie: The Most Beautiful Village in France?
Next Post: Conques, France: A Journey to the Middle Ages »