We set out that day with our rented beach cruisers and ghetto map in search of some caves and a “blue” lagoon. Yup, we snubbed the tours filled with young British punks and burnouts in training. Filled with the spirit of adventure, we thought we could find that hidden jewel that everyone missed by going on those tours. In hindsight, we must have been high.

Peddling toward our destination — now on a much quieter dirt road — we saw a sign for the Phi Li Nang Cave and swimming lagoon. We excitedly took pictures the whole way, thinking this was going to be an amazing find. Soon we came upon two bridges and a shack, where the Laotian gatekeepers instructed us to pay 15 kip each for entrance fee, barely useable flashlights, and a private tour guide. 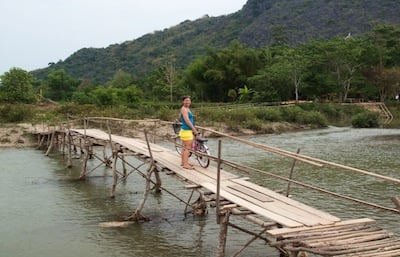 While I decided to wait in safety, the guide — who was about 3/4’s of Scott’s size — took him into the first cave. He toured Scott around showing him stalactites and stalagmites. Good thing he didn’t try to lose Scott because it was too dark to see much even with a barely lit flashlight and I was waiting outside wondering for a moment if it was such a good idea for us to split up.

I decided to join them on the tour of the next cave because they promised a lagoon! We walked and crawled for about 5 minutes when the ground suddenly sloped downward further than we could see. Our guide went first with no problem and found a spot within arms reach of us to stop so that he could pretend to help us down. Scott went next and that’s when things got interesting. I don’t think Locals (flip flops) are meant to be worn in slippery caves. Before I knew it, he was on his butt and sliding until the guide could grab him. We didn’t know how much further the drop was and at this point Scott was covered in mud, so we reluctantly turned back without seeing any lagoon.

After that disappointing site, we peddled back to town and ran into the Norwegian man from our hotel. He explained to us his money woes while we bought him a beer. Trying not to let the day get away from us by letting this guy talk our ear off, we hurriedly asked him to direct us to the un-crowded “secret” blue lagoon that he had spoke of the day before.

After searching for this lagoon for close to an hour, all we got was more sweaty, tired and frustrated on our beach cruiser bikes that were not meant to be going off-roading. Finally we gave up on finding the secret spot, went back into town, and asked a few people how to get to the touristy blue lagoon.

How to Get to the Blue Lagoon

You get to this lagoon by crossing the only bridge in Vang Vieng where you have to pay a toll. That is how you know you are at the right bridge. We asked the toll collector at the bridge how far it was to the lagoon. He effortlessly explained it was 15 minutes there and 15 minutes back. So after 45 minutes down a bumpy dirt road, numerous times of wanting to turn back, and several tourists passing us on motorbikes (the smart choice), we finally arrived at the “blue” lagoon.

Our hearts sank when we asked some people heading back from the lagoon how it looked.

“Not so blue. We are going to the cave instead”.

Walking the final 100 meters to our destination, we realized the lagoon was nothing more than a mosquito-ridden pond filled with stagnant water. But as hot as we were, that didn’t stop us from taking a dip!

I think the best part of my day was on our ride back from the lagoon. We rode our bikes through herds and herds of cattle that were walking along the dirt road. This is how I imagined Laos to be!