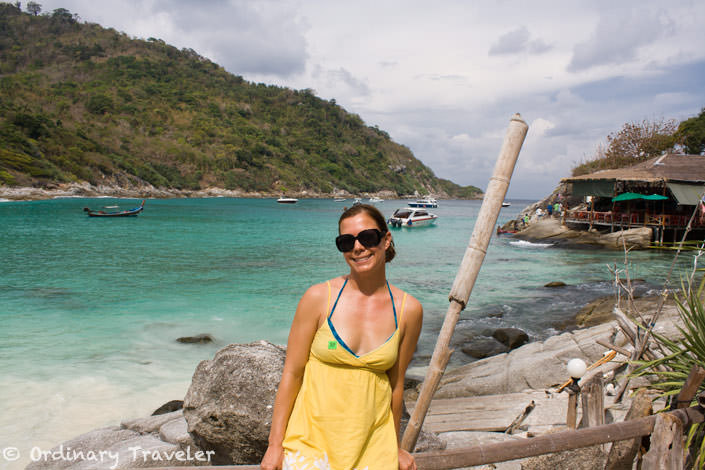 Since traveling through Australia felt like we hadn’t left the United States, we were pretty excited at the thought of experiencing some culture in Southeast Asia.

After 10 grueling hours at Brisbane airport we eagerly boarded our 2.5 hour flight to Melbourne, caught some more zzz’s, then rushed through the Melbourne domestic terminal to the international terminal with a few minutes to spare before we got on our 8 hr flight to Phuket.

Four and a half in flight movies later, we were descending toward clear, turquoise waters. Then just 500 baht to catch a taxi to Old Town Phuket. A word of warning, just because you have an address and phone number to your hotel it does not mean it will be easy for your taxi driver to get you there. After asking everyone he knows and numerous failed attempts to call our hotel, our taxi driver was noticeably irritated. 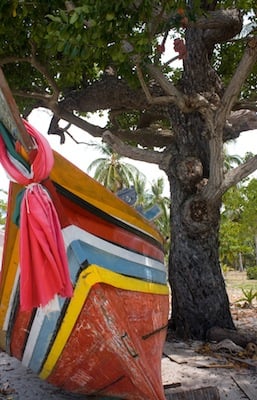 Luckily the hotel answered the phone just before he was about to drop us off at the nearest street corner in a city where we felt like complete gringos. Old Town Phuket has minimal tourists, we found out upon arriving at the Old Town Phuket Hostel, where the receptionist spoke very little, and I mean very little, English. I do realize I’m in a foreign country and i do not mean to sound like an ignorant American, but I simply was not prepared. Our room was nice enough for 450 baht, and we were happy to get a good nights rest.

The next morning we got an early start to try to avoid carrying our bags during the hottest part of the day. On our walk to the bus stop we were lucky enough to see the local weekend market in town. Their standard of food cleanliness does not compare to the western world. The most intriguing food stall was all the different kinds of meat sitting out in the sun and heat with no case or cover for the flies to have a field day. After checking out the market, we hopped on the local bus to Kata Beach for just 30 baht each.

The bus station in Kata is right on the beach and only steps away from many choices of accommodation. We spent about thirty minutes in the hot sun looking for something cheaper than $27 US per night, only to find that most places were more expensive. We settled finally at Rico’s Bungalows since it had a pool.

Each of the bungalows surrounded the pool and they were quite luxurious for our standards. And the hotel staff were very helpful when it came to any questions we had about Thailand.

We stayed in Kata Beach for three days, and we were lucky enough to have waist to head high surf every day at Kata Beach. Since we had just come from Australia where everything is expensive, we were more than happy to pay $3-5 US per hour to rent a surfboard. On the way back from the beach you can buy freshly made crepes with your choice of fruits, jams and other sweets. We usually enjoyed the banana Nutella, and they were awesome after a good surf session! 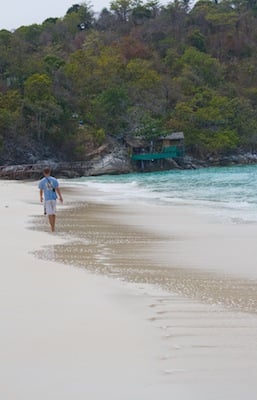 Kata is a bit touristy and not exactly a place that you will meet many backpackers. It is more of a destination vacation for people who have no problem spending a lot of money. But you can find a few cheap places to eat if you are willing to search them out.

The Orchid, on the main street of Kata, has cheap and delicious Thai dishes with a large menu to choose from. Also, don’t knock it, but we found 7 Eleven to be a great place for muffins in the morning and rice burgers for lunch. They lure you in with their inviting air conditioning since most restaurants only have fans. And when it is 95 degrees and humid, A/C starts to sound like heaven.

On our second day in Kata, we took a tour to Raya Island. It was about $40 US per person with Raya Father Tours. The snorkeling was amazing along with the lunch that was included at one of the restaurants on the island. We spent the rest of the day chillin at the Reggae bar on the beach or exploring along the cliffs.

There are some beautiful and exotic wildlife on the island including large Iguanas and birds that looked like Hawks. I wouldn’t say Raya is uncrowded, but compared to Phi Phi or James Bond Island, it is deserted.

After all that beach play and a long two weeks prior of sleeping in the equivalent of a minivan, it was time for a relaxing Thai massage. We found a place next to our hotel for 200 baht each and they set us up in the same room, side by side. Everything was great until the very end of the massage when the therapist did a jerky back side bend that instantly left me sobbing from the pain.

I couldn’t speak and I was embarrassed that I couldn’t stop crying. After the staff realized what was going on, a different lady came in with a jar of red balm and massaged my spasming muscles. The pain didn’t ease that night, so she told me I could come in the next day and she would work on the spot again if I wasn’t feeling better.

Needless to say, I’m a bit leery of massages in Thailand after this experience! Our plan was to leave early the next morning to catch the 9am bus to Koh Phangan. Since I wasn’t feeling better in the morning, we waited until later in the afternoon and took the more difficult and longer route to the island.

Have you been to the south of Thailand? If so, what was your favorite spot?