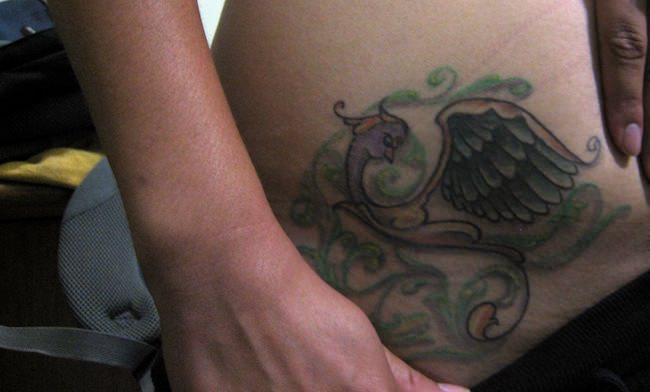 This article is written by Rease from Indecisive Traveler. Rease is a US citizen currently living the ex-pat life in Buenos Aires, Argentina. She is bilingual and an experienced traveler. She loves gaining and sharing knowledge of local cultures, customs and adventure.

I have 9 tattoos. Seeing as many people know me simply through my articles and an avatar here and there, that may surprise you. However, now that you know, it should be no surprise that I decided to get tattooed in Buenos Aires when I was traveling through in 2009. It could have been a totally smooth and uneventful experience but then, why would I be boring you with this post at all?

It started with a magazine. I was sitting in the hostel with my friend Rachel and she stumbled upon a tiny blurb in a British magazine about tattoos in Buenos Aires. I read about an artist who was supposed to be very good at Porteño (Buenos Aires) graffiti art. The next day we set out on a quest for this tiny tattoo shop buried within one of the many “galerías” in Buenos Aires.

These galerías tend to be narrow openings on busy streets that lead into a deep labyrinth of stairs and itty bitty stores. We stopped in countless galerías searching for this specific artist, all to no avail. Eventually, we began to get irritable and I decided that I would just go to a different parlor and find a suitable artist. This also proved difficult, as parlor after parlor seemed to be inexplicably closed for the day. After hours of searching, we gave up and went back to the hostel, deflated and totally annoyed.

We were not ready to give up and the next day we were able to locate the tiny shop fairly quickly. I was able to get the artist to design something for me and he was fairly cool with my criticism of his first 2 drawings. I decided to get some graffiti art on my right hip, a bird with decorative swirls. The artist wanted tons of flowers, which I vetoed.

This was my 9th tattoo, so I was not nervous, at least not at first. After I agreed to the design, the artist led me up what looked like a spiral fire escape to an even tinier place. I realized that the tattoo was likely to take a while and would require quite a bit of pressure on my bladder. I knew that miniscule place could not hold a bathroom, so I asked the artist if there was one in the building. His response? “It’s complicated”. I’m sorry, that is not a response you want to hear to a question as simple as “is there a bathroom?” How could it be complicated?

The artist took me to another employee and explained that I wanted to use a bathroom. The employee echoed the artist’s sentiments of complication but agreed to help me out since I seemed rather insistent on emptying my bladder before a 2 hour tattoo session. The employee walked me through the galería to narrow punk clothing store. He asked the girl working there to help me. The shop girl handed me a key and gave me directions that sounded like a Nintendo cheat code. I managed to make it to the staircase she described and was immediately discouraged.

The staircase was dimly lit and winding into an abyss I could not see the end of. I tentatively began walking down the stairs and immediately slipped. I tumbled down the spiral, slamming my butt and back repeatedly on the concrete steps. I laid moaning at the bottom of the staircase until I could regain my composure. That is when I took a look around and said “Oh my God, I’m in a scene from Saw”

The dim light had begun to flicker. I could no longer see the top of the stairs, my only form of escape. The faint sound of dripping water from an unknown source was echoing against the filthy, mold covered walls. This place looked like somewhere you would wake up in a tub of ice missing a kidney.

I managed a squatting maneuver and ran right past the faucets that spewed suspiciously colored water, deciding to use the sink in the tattoo parlor instead. I made it back up the scary stairs of death and back to the tattoo shop, just in time to lay down and let a strange man put his hands uncomfortably close to my crotch for a couple of hours while he tattooed me.

The tattoo turned out beautifully and I was thrilled up until I realized the consequences of my spontaneous decision. No, I didn’t regret the actual tattoo, but I was suddenly very aware of two things- the differences in tattoo care in South America and the amount of walking I was expected to do for 2 weeks with a fresh tattoo precariously placed on my hip.

The tattoo artist slathered my hip with some sort of cream that seemed to do nothing but make me sticky and shiny. He then covered me in saran wrap, as if my hip was a leftover meal instead of a healing wound. Within hours, I had an allergic reaction to the cream. In case you didn’t know this about me, my skin is allergic to basically everything (See: The Attack of the Mexican Bee)

The combination of my allergic reaction and the healing process of a part of the body you move almost constantly took its toll on me. For three days straight, I wore my pants unbuttoned and rolled over, concealed by an extra-long shirt. Rachel continuously threatened to pants me. Oh well, lesson learned with a beautiful tattoo to show for it!

Previous Post: « Top Reasons to Take a Sabbatical from Work to Travel
Next Post: The Forgotten Coast: Off The Beaten Path in California »