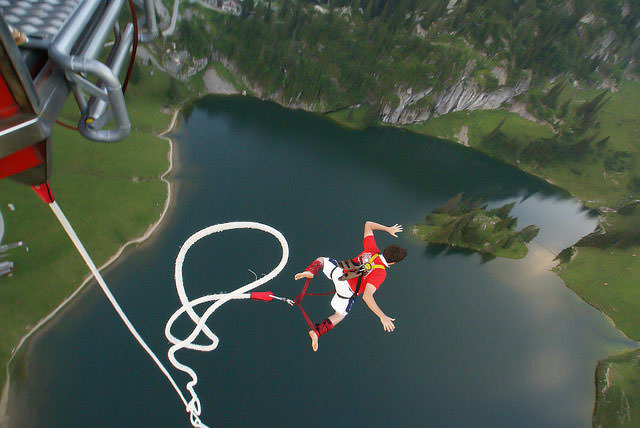 When it comes to adventure sports that nearly anyone can take part in, bungee jumping is certainly one of the most popular. Unlike, say, white water rafting or hang gliding, there’s no special training or preparation needed — you just book your trip, turn up on the day and get jumping!

Bungee jumping may have its roots in the practices of the native people of the Pentecost Island in the South Pacific, who leapt from great wooden structures with vines tied to their ankles as a test of courage. While modern-day jumping usually involves a bit more safety equipment than this, the principle hasn’t changed a bit – it takes a lot of guts to do your first one, but once you’ve done it, you’ll be hooked on the rush.

If this has whet your appetite for thrills, here are some of the best spots around the world to bungee jump.

The Best Places to Bungee Jump Around The World

The highest commercially-operated bungee jump, according to the Guinness Book of Records, this certainly is a test of nerves: a 216m drop to the valley floor. It’s also the spot where South African daredevil Bill Boshoff made his record-breaking 101 bungee jumps in 14 hours in 2002.

New Zealand is often seen as the bungee jumping capital of the world, and places like Queenstown are why. The resort town offers a variety of jumps, including the Kawaru Bridge and the Nevis Highwire. For the more adventurous, there’s the Ledge Urban Sky Swing where you can enjoy 45 minutes of soaring 400m above Queenstown.

Connecting mainland Greece with the Peloponnese peninsula, the bridge over the Corinth Canal is also a favourite with bungee jumpers. At only 79m high, it’s perfect for beginners and offers a beautiful view of the blue-green waters below.

Spanning the Zambezi river, which separates Zimbabwe from Zambia, this jump is very special for another reason – it’s close enough to the enormous Victoria Falls that you can even feel the spray on your face as you dive!

What’s better than a bungee jump? How about a reverse bungee jump from a hot air balloon, over the remains of an ancient Incan city? This 141-foot drop is taken over the Sacsayhuaman Ruins, offering a completely unique way to get your history fix.

Best known for its appearance in the James Bond film Goldeneye, this hydroelectric dam is also a great place to dive from (and the world’s second-highest commercial bungee jump). You’ll need a strong stomach for this one!

Bungee jumping facilities are usually provided by a local company who have plenty of experience. Just give them a call and book your jump in advance. The last thing you want is to find they’re full when you get there!

5 Common Travel Photography Mistakes (And How to Avoid Them)

The Best Carry-on Luggage (For Every Type of Traveler)