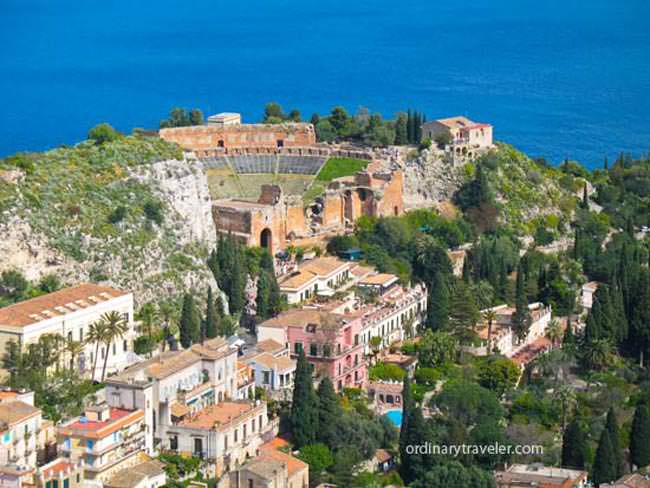 After savoring “the best pizza in Italy” at Pizzeria Da Michele in Naples, (Via Cesare Sersale 3, Napoli) then crashing in my bed at the friendly Hostel of the Sun, I awoke with an intense desire to visit Taormina, Sicily again.

Taormina: The Gem of Sicily

I had been traveling all over Europe through Spain, Italy, Prague, Amsterdam, Paris, and even though I had already spent 4 days in Taormina at the beginning of my trip, something was calling me back to this enchanting town. Was it the people? The food? The beach? The friendships I had made? I wasn’t sure what it was, but after spending two days in Naples and realizing how close I was to Sicily, I just had to go again.

From Naples, it is easy enough to hop on a train that will take you directly to Sicily. At first, this concept seemed foreign to me considering the fact that Sicily is an island. But sure enough, the train was loaded onto a huge ferry and we were on our way! If you would rather fly to Sicily, you can fly into Palermo (REG) or Catania (CTA). Both of these airports have regular buses to Taormina.

The town of Taormina lies on the east coast of Sicily and offers mesmerizing views of the Mediterranean Sea and Mt. Etna volcano. Not far from the main drag of Corso Umberto, you will find steps leading down to relaxing beaches with clear ocean water. The best times to visit Taormina are spring and fall. The months of July and August are the busiest times, with the hottest weather.

If you are looking for budget accommodation, you have quite a few hostels to choose from. It just depends on how far you want to be from the city center. If you are looking for a little more luxurious choices and want to make sure you are walking distance from downtown Taormina, check out Villa Carlotta or Hotel Villa Schuler. I stayed at Hotel Villa Chiara. The staff was helpful, it was under $100 US, and was literally a stones throw away from Corso Umberto. 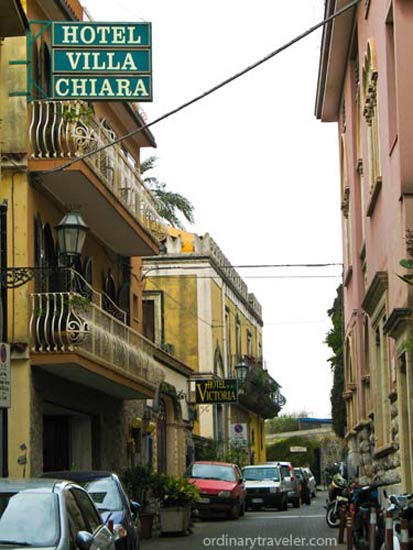 Things to do in Taormina, Sicily

If you are looking for nightlife in Taormina, my personal suggestion is Morgana Bar. I came upon this place by the recommendation of an Italian friend living in Rome. I became fast friends with the staff and managers at Morgana, who are some of the kindest and most hospitable people I have ever met.

This tastefully decorated bar is frequented by locals and tucked into one of the narrow alleys on the downhill side of Corso Umberto I. Don’t expect this place to get much of a crowd before midnight, so an early night is not an option. I visited a number of other clubs in Taormina, and while they can be fun for dancing, it has less of a local feel compared to Morgana.

My second favorite thing to do in Taormina is simply walking the main street of Corso Umberto I. Many of my days were also spent people watching, eating mouthwatering gelato, stopping for an afternoon glass of wine, or devouring an entire pizza at the many, many authentic restaurants. 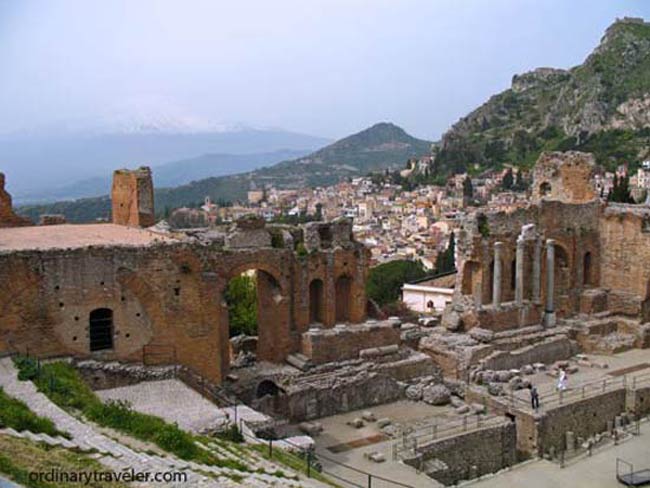 The beach is always a great way to spend a day or even a few hours. The infamous beach of Isola Bella is popular among tourists and since the bay protects it, you can enjoy sunbathing here at times when the other beaches may be a little chilly.

The town of Taormina and its surrounding areas will always hold a special place in my heart. It’s one of the few places I could see myself living for a long period of time. If you can find a good deal on airfare, this should definitely be on your list of top places to visit. Ciao!!

Rome Travel Tips: Everything You Need To Know Before Visiting

The Best Travel Backpacks For Every Budget

10 Places You Must See in Italy

Previous Post: « Does Long-Term Travel Have an Expiration Date?
Next Post: How To Enjoy A Layover in South Korea »