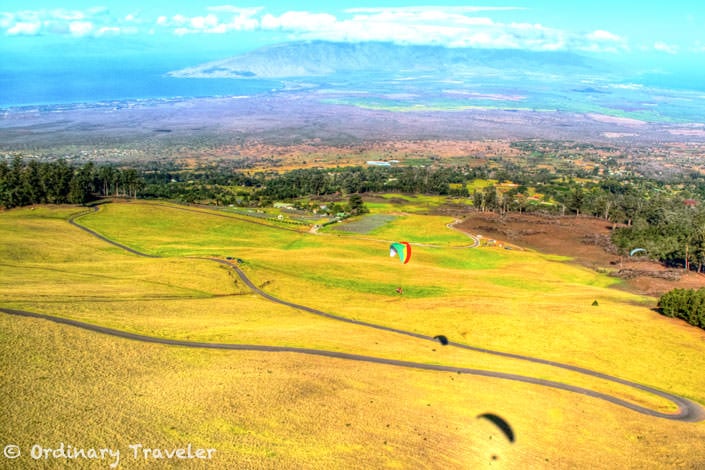 Besides our island helicopter tour, the activity we were looking forward to the most in Maui was Paragliding. I was nervous, but I was even more concerned for Scott who has a fear of heights! I wondered how he would feel about flying 3,000 feet in the air, strapped to something that resembles a parachute.

It turns out we both handled it much better than I had anticipated.

We arrived at the landing site just before 8:00am, where we met Dexter, the owner of Proflyght Paragliding, and his crew. As we rode up the mountain with Dexter, his mom (and business partner) and three other pilots, we learned about the paragliding community and what it’s like to travel the world with just your paragliding gear on your back, stopping at launch sites around the world.

It sounds like they take adventure travel to a whole new level.

After Dexter’s mom dropped us off at the launch site, the butterflies started dancing around in my stomach.

Am I really doing this?!

In addition to my claustrophobia, I may have developed a slight fear of heights over the last few years (that I most likely caught from Scott!).

We partnered up with our pilots and after talking with my guide, Pete, I started to feel completely at ease. These guys have been doing this for about twenty years and have never had a single accident – not even a sprained ankle. He told me they have taken 80 year old women up and even babies! If they can do it, then so could I.

The take off was a breeze, literally. Our pilots each waited for the ideal take-off wind. If the air didn’t flow up the mountain perfectly, then we wouldn’t launch. They take the safety of their passengers seriously.

Once we were floating a few thousand feet above the trees, it felt surreal. 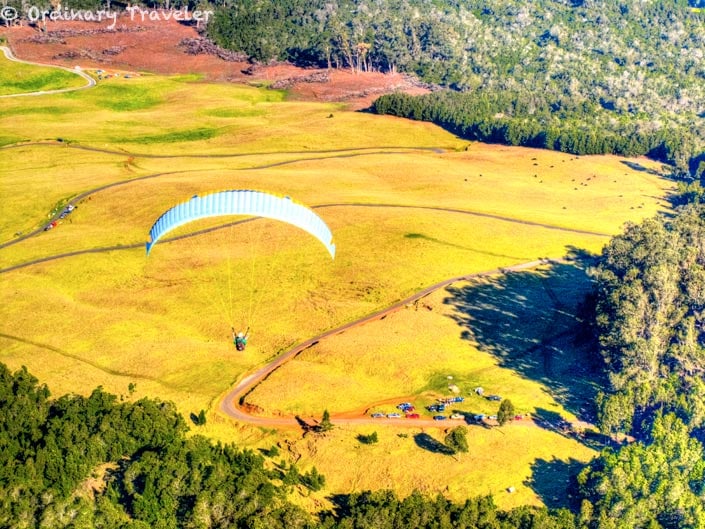 The view from above was astounding – a panorama of Maui’s coastline and mountains with a piercingly blue sky. I was at peace. We both felt like jelly afterwards and had permanent grins for the rest of the day. I can see why it’s so addicting!

Have you ever tried paragliding?

Disclaimer: We were guests of the Maui Visitors Bureau and Proflyght Paragliding. As always, all views expressed here are our own.

10 Best Places To Visit In Hawaii

7 Experiences Every Traveler Should Have in St. Lucia

The Ultimate Guide to Maui on a Budget