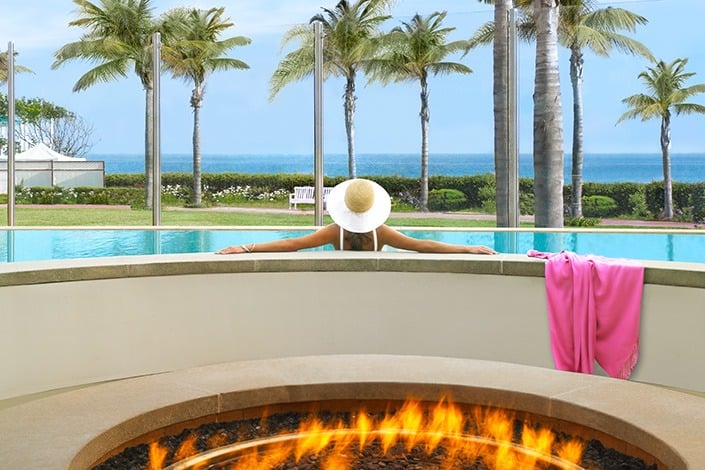 During Halloween, it’s hard to not believe in the paranormal, so we went out in search of the most LEGENDARY haunted hotels in California.

Whether you believe ghost tales are fact or fiction, these hotels with eerie backstories are sure to test your wits!

The classic Hollywood Roosevelt is reported to be haunted by celebrities who had previously lived there, specifically Marilyn Monroe and Montgomery Clift. During the 1950’s Marilyn temporarily resided in Suite 1200, which led up to the peak of her modeling  career. Although her room is not said to be a hotspot of activity, Marilyn’s reflection has been seen numerous times in a mirror hanging in the hotel’s lobby – a mirror taken from Suite 1200.

Montgomery Clift, another actor and celebrity icon of the 50’s, is said to haunt his old room 928 and rehearse lines out loud.

In addition to the celebrity “sightings,” many other inexplicable ghost occurrences are known to happen regularly. Perhaps the most famous legend is of a small girl named Caroline, who supposedly drowned in the hotel’s pool with her brother after their father left to run an errand.

She makes phone calls from the lobby’s main phone, and haunts the Blossom Ballroom. Attempts at contacting these spirits with ouija boards made for very frightening experiences, so do not mess with these ghosts!

Tucked away in the heart of wine country is Napa River Inn, home to ghosts of owners past. The first reports of ghosts date back to the early 1900’s; although the first ghost was said to be recognized as Captain Albert Hatt Jr., the son of original owner, there seems to be an ever-present woman in white who is the “resident ghost” and seems to be more prominent throughout the inn.

Unusually cold rooms are reported during warm weather, elevators go up and down without being prompted, doors open and close, and one guest has even reported having a personal encounter with the ghost of Robert Keig, the second owner of the once working mill.

Rooms 207 and 208, which happen to be the two rooms directly above the spot Capt. Albert Hatt died, are reported to be the most haunted. The presence of these ghosts is hard to deny – even the inn’s staff fully acknowledge them!

Peaceful ghosts walk the halls of this gorgeous Sonoma County manor, including a woman – Hannah Paxton – who was the wife of the original builder and owner John Paxton. She has been witnessed by a paranormal expert who explored the house, as well as numerous guests.

Room 101 seems to have the most mysterious history of guests’ personal items disappearing, only to turn up in unusual places. Most of these strange occurrences happen in Room 101 or the dining room. 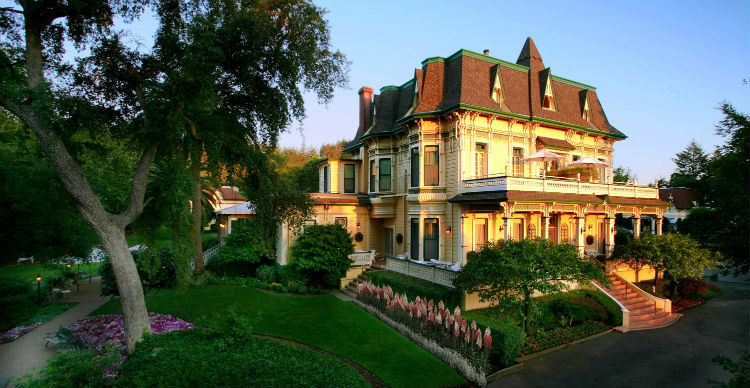 Former brothel and gambling house, the Glen Tavern Inn has had a bit of a wild history. A little girl — possibly multiple children — have been heard running up and down the halls, laughing, on the second floor. In room 307, a ghost named Calvin is accompanied by a prostitute of the Prohibition era who was found decapitated in the room’s closet by a maid.

The stories of cold spots, shadows, and strange voices have proven to be valid enough to be investigated by the Travel Channel and multiple paranormal specialists, so if you’re looking for a real scare this hotel will give you an unforgettable experience!

Man and woman apparitions are often seen here the Union Hotel, and legend is the young woman supposedly hung herself in one of the rooms. She has been reported to cry or talk to herself, and will sometimes stare out the windows of empty hotel rooms looking down on the street below.

Every year in the month of October, paranormal experts lead a “Ghost Walk” around Benicia and tour the town’s most haunted locations; the Union Hotel is, of course, the main attraction.

The Zaballa House is known to be the oldest standing house in Half Moon Bay, and Room 6 is said to be haunted. Alarms sound, keys jingle, and windows rattle at any hour of the night. Although ghosts are denied by the owner and staff, there was – up until recently – a guest book for guests to log their “ghost” experiences.

This Titanic-lookalike rests in the Long Beach Harbor, where’s she’s been since 1967. Once a luxury cruise ship – then troop ship in WWII – the Queen Mary has seen a lot of horror.

As many as 150 spirits are said to haunt it, and is the site of 49 deaths (not including any that happened during the war). Both the first- and second-class pool rooms are haunted by two women and children that drowned aboard, and cries can sometimes be heard coming from the once third-class children’s playroom where an infant died.

The ship’s most well-known ghost story might be that of an 18-year-old sailor who got caught in the engine room’s door 13 and died trying to escape a fire.

With so many accidents and such a gruesome history, it’s no wonder this ship is a hotbed of ghost activity and one of the most haunted places in America. 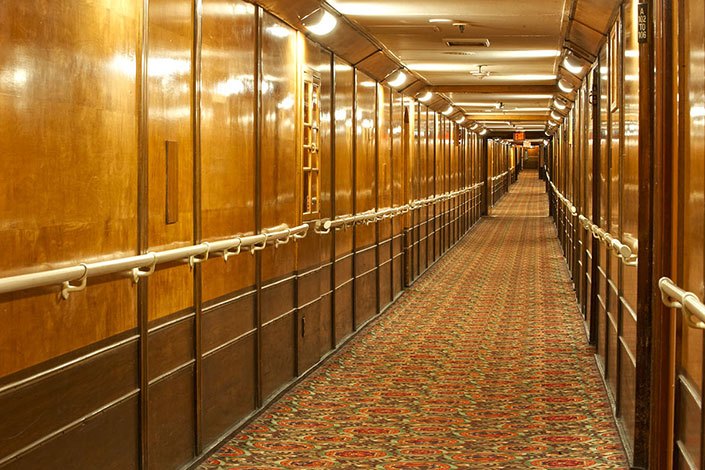 This popular celebrity hideaway has been home to many A-list celebrities like Lindsay Lohan and Humphrey Bogart, and visited on numerous occasions by others like John Lennon and Robin Williams. However, one particular famed comedian – John Belushi – died of a drug overdose in 1982 and is said to have never left.

Belushi made Bungalow 3 his home, but after his death many who have stayed in the room report feeling afraid to look in the mirror, as if they were being watched.  In 1999 a young boy, who was staying with his family in Bungalow 3, was found laughing at a “funny man” – who, when showed pictures of past celebrity guests, was easily able to identify John Belushi. Another death of a famous photographer, Helmut Newton, occurred in 2004 when he fatally crashed his car leaving the hotel.

The Grande Colonial was once a popular hangout and temporary residence to the late Groucho Marx, and is said to be haunted by him as well as a a few other ghosts. When the opportunity arose to stay in Groucho Marx’s room and do some paranormal investigating ourselves, we couldn’t refuse.

Equipped with a ghost hunting kit (and a couple drinks to keep our wits about us), we set off on a quest to find Groucho Marx or the other residence ghost, Abigail. Although skeptics, we kept an open mind and decided to try out our equipment in our own room before venturing out in the rest of the hotel.

Our paranormal experiment began abruptly; as we stood up to gather our things, the lights turned off and our room immediately went black. It seemed Groucho was already having some fun.

The staff reports regularly getting phone calls from the room, but always find it unoccupied. Thankfully, we didn’t receive any mysterious phone calls on our end, but our ghost-detecting EMF machine screamed with activity when we scanned the bathroom mirror. Although there was no visual reflection besides our own, we wondered if maybe there was something there we couldn’t see.

There have also been many late-night noise complaints of loud voices, stomping, and running down stairs near the bakery, which was once two apartments housing two women and two men. These four were known to throw “wild parties” back in their time, and apparently still do so today!

The backstory of Hotel del Coronado’s haunted Room 3327 begins in 1892, when a woman named Kate Morgan arrived by train on Thanksgiving Day after a fight with her husband. After waiting five long days for her husband’s arrival, Kate committed suicide on the beach just outside the hotel – her cause of death ruled a self-inflicted gunshot wound to the head.

Many people, including much of the hotel staff, believes the hotel is still inhabited by Kate’s spirit to this day. After hearing of books written about the legend and paranormal research confirmation, the legendary Kate Morgan rumors were enough to make me want to see it for myself. 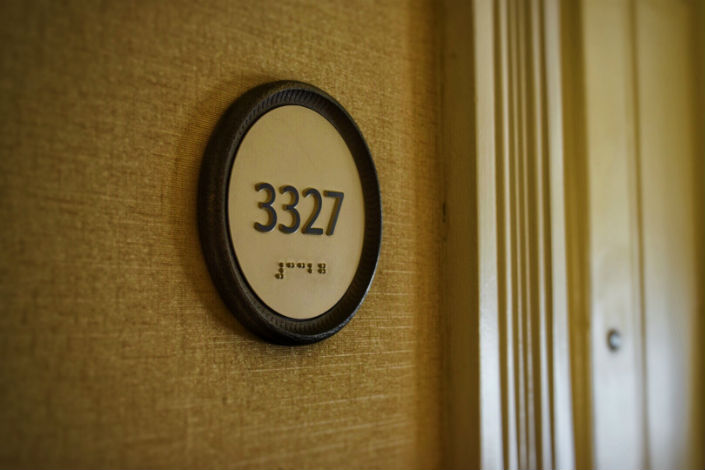 Upon arriving, the Del’s staff were happy to share their encounters with Kate and gave me more than enough stories to intrigue me. The manager even described to me his own account of a personal encounter with her, on the beach — in the exact location where she died.

As he was taking an early morning run along the beach and stopped for a moment to admire the sunset when he could see in his peripheral someone approach him from the side; he commented on the sunset, but when the person had no response he turned to them but the person was gone.

An elevator attendant told me of an incident where someone had kicked the metal birdcage-style elevator and made the door rattle, but no person could be seen through the slats.

Gift shop staff are convinced Kate isn’t fond of blondes; according to the two women who run the shop, Marilyn Monroe memorabilia often flies off the shelf mysteriously yet Kate Morgan items remain untouched. Hotel employees in general seemed quite indifferent to the strange happenings, and said they were never surprised when unsuspecting guest reported weird occurrences in room 3327. In my personal opinion, the fact that most reports are by guests that are unaware of that specific room’s history make the stories seem a bit more plausible.

My own experience? I wasn’t awakened by flickering lights and I did not witness any items moved out of place, but was caught off-guard by something a bit less noticeable.

After being in the room for many hours, I distinctly smelled perfume near me — and it was most definitely not my own. I didn’t think much of it, until I scanned Hotel Del’s website for the history of the hotel and room.

The list of strange incidents included the stereotypical footsteps and noises, doors opening and closing, and…inexplicable scents. I was almost shocked and now convinced I couldn’t have imagined the perfume, because a smell is not something you can imagine is it? I, a rational skeptic, may very well now believe the real possibility of ghosts.

South Lake Tahoe in Summer: Best Things to Do, Where to Stay & More!

20 Best Things to Do in San Francisco

How to Visit Napa on a Budget

Have you had strange or inexplicable experiences in any of these hotels? Let us know!

Millennial Travel Expert at Ordinary Traveler. Nikki is a California-raised 20-something providing useful travel tips and fun trip ideas for young professionals looking to get the most out of their vacation time.