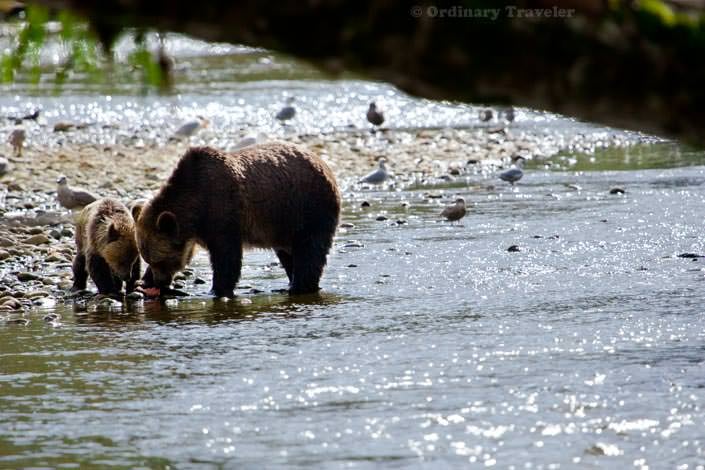 A once in a lifetime experience getting up close to wild grizzly bears in Glendale Cove off the coast of North Vancouver Island in Canada.

Our small, flat-bottomed boat glided along the inlet without a sound. Our captain had cut the engine after receiving hand signals from up ahead. This was also our cue to start whispering and make as little noise as possible.

This clearly went against everything I had been taught two weeks before on our Alaska Un-Cruise. I thought you wanted to make as much noise as possible and never surprise a bear! But, I trusted our guides since they had obviously been conducting these grizzly tours for years.

Now it all made sense why our guides had all suited up in thick waterproof overalls and boots before we left the speedboat. They both quietly entered the waist-deep water from each side of the boat and began pushing us towards the action. 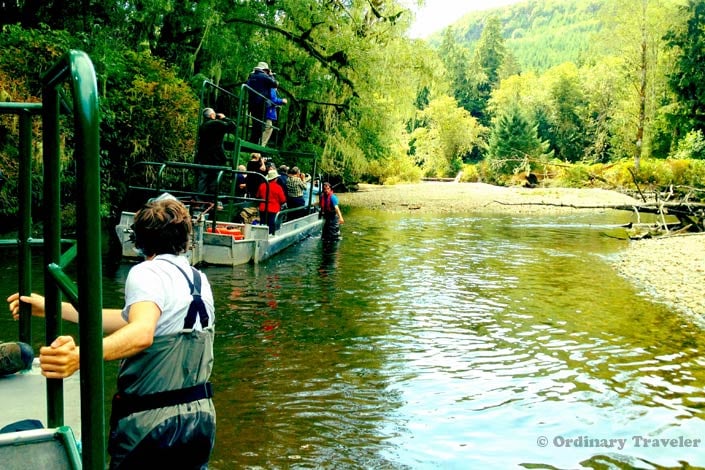 I knew what was coming next, but had no idea how I would react. I imagined our boat staying a safe distance from these huge bears, but I was in for a surprise. The photos online don’t give you a clear idea of how close the crew gets to these wild animals.

We passed a smaller boat to our left, going in the opposite direction — all of them staying just as silent as our group. The eerie stillness built up my suspense even more; I could feel my heart pounding. The boats ahead of us had stopped and everyone started snapping photos like they were soldiers in a firing squad.

“This is it!” I thought, as we rounded the corner and made our way to the clearing.

And then I saw him. My first wild grizzly bear sighting. All I could see was his enormous head floating along the water.

He submerged his snout beneath the water line, snorkeling for salmon. Even in late September, there are still plenty of salmon for these bears to feast on — each bear accumulating as much as 20,000 calories per day in order to prepare for winter hibernation.

With my camera glued to my face, photographing this large male, I didn’t initially see a second male grizzly approaching from the mud embankment. I immediately turned my attention his way. He slowly advanced toward the water, making his way to a large log where he stopped toward the end — almost as if he was posing for the camera. 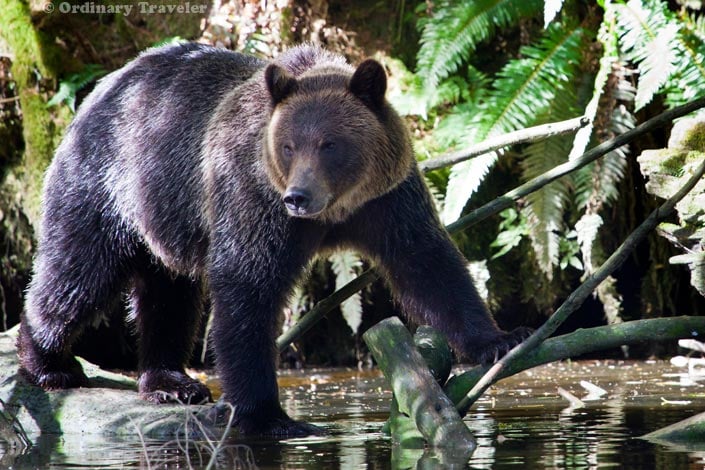 Both grizzlies then continued downstream, out of view.

The crew jumped aboard the boat and we continued up the river, where it took no time at all to find two mama bears with their cubs — playing in the water and fishing for salmon.

We spent the rest of the afternoon following these six bears up the river, getting an insider glimpse into their world. They would occasionally look over at our boats, but mostly seemed uninterested in our presence. 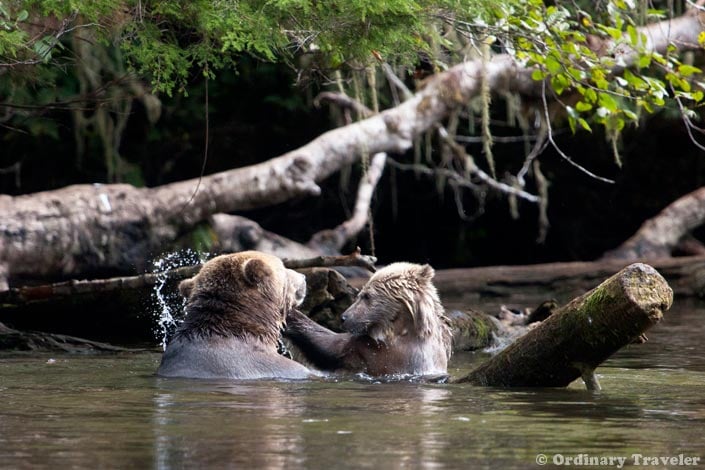 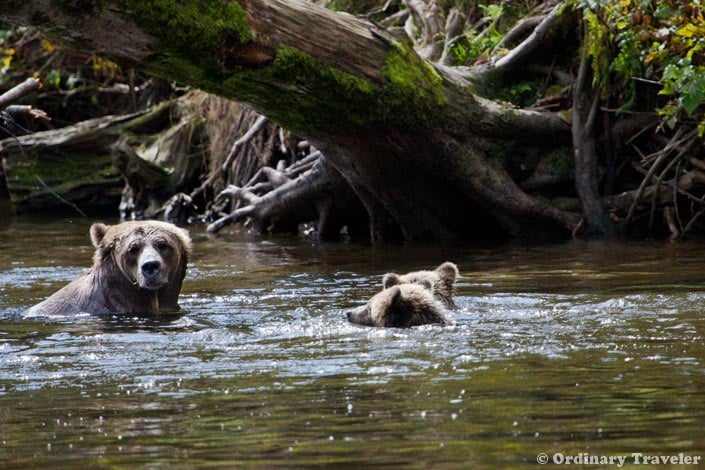 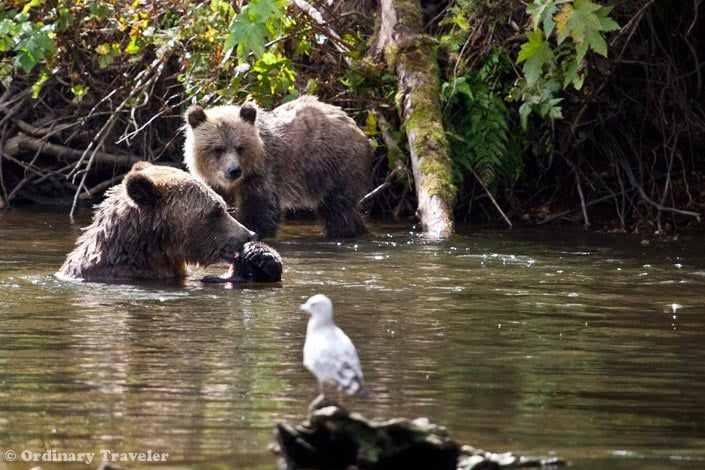 This experience was extremely eye opening for me and has compelled me to see bears in a different light. I now realize grizzly bears are not the vicious animals they are often made out to be.

The tour with Tide Rip Grizzly Tours took place in Knight Inlet — the longest inlet in British Columbia. The area where we saw the bears is Glendale Cove, located on the south side of the inlet.

This wilderness area is sixty miles from Telegraph Cove (about a two-hour boat ride) where the tour departs. Once you get closer to Glendale Cove, the water turns a deep emerald green as a result of glacial water flowing from the mountains of Knight Inlet.

During the tour, we glimpsed bald eagles, dolphins, black bears and a white wolf — in addition to getting close to these grizzly giants. 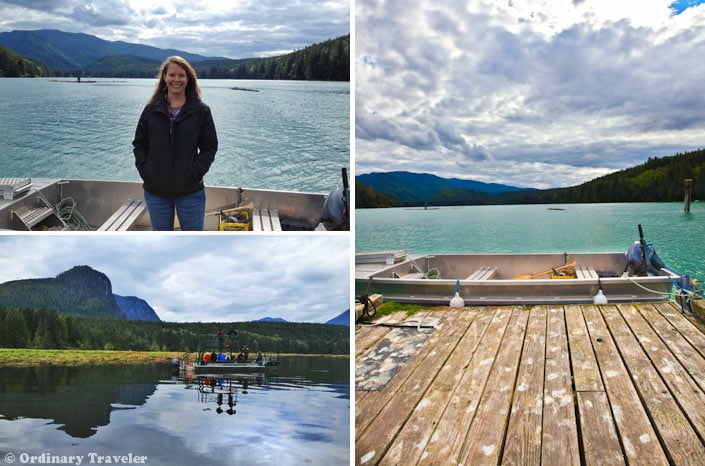 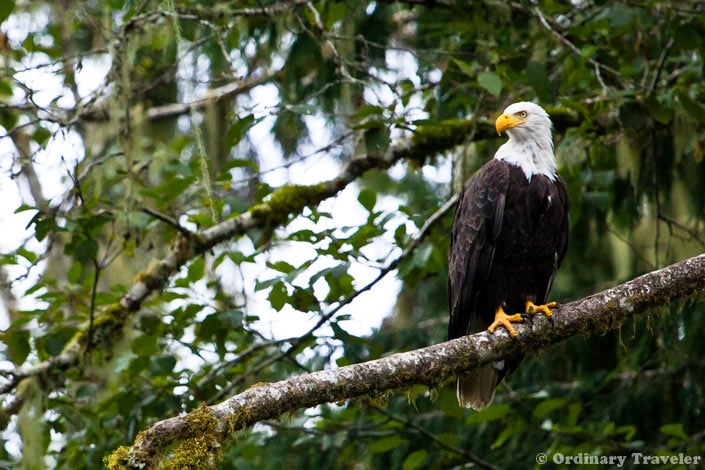 When You Go: Telegraph Cove is located on the northern end of Vancouver Island. Seasonal activities — such as grizzly bear tours, whale watching and kayaking with orcas — generally run from May through late September. Telegraph Cove Resort offers camping as well as cabins with self-contained kitchens.

Have you ever seen a bear in the wild? 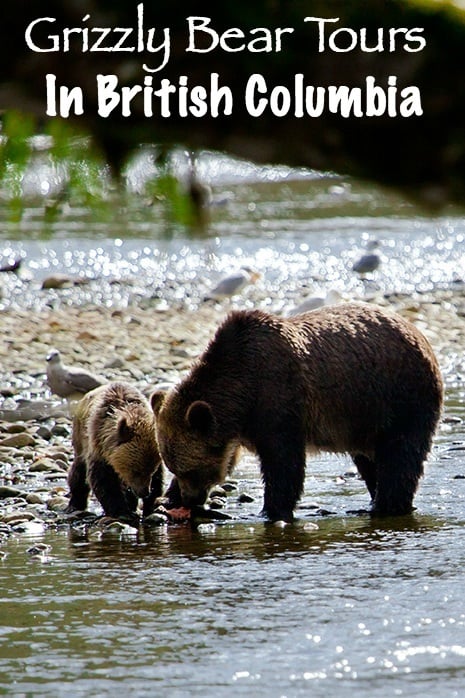 A special thanks to Destination British Columbia, Tourism Vancouver Island and Tide Rip Grizzly Tours for making this experience possible. As always, all opinions are my own.

Previous Post: « Surrounded by Whales in Stephens Passage, Alaska
Next Post: Where To Stay In Loreto, Mexico: Villa Del Palmar »