We awoke on the morning feeling we had everything in order to head to Luang Prabang from our hotel in Vang Vieng. After ordering our breakfast at Santana’s, Scott went to change $20 for 162,000 Kip.

We finished our meal and went back to the hotel (Grandview Hotel on the river by the tubing station) to check out and catch our taxi that was already waiting. Upon handing over our keys, the owner said we needed to pay for our two nights.

Incidentally we had paid for the first night before we checked in and the second after deciding we would stay a second night. We got separate receipts for these two cash transactions. After only finding one receipt and some heated conversation, we had no choice but to pay for one extra night since we had booked our bus out of town with the same hotel owner.

It was definitely one of those “woes of the road” moments, but we learned a good lesson about keeping receipts in a safe place until check out. We did in fact find the second receipt two hours later being used as a bookmark in our guidebook. However, turning around was not an option.

The Drive from Vang Vieng to Luang Prabang

About two hours before we arrived at Luang Prabang, we were stopped by some Lao men in uniform who told the driver we would be stopped for ten minutes.

Upon further investigation, we found that a truck had gone over the edge of a cliff and they were attempting to pull it up with a larger truck. They were not successful, at least not while we were there. There didn’t seem to be anybody in the truck, so we all convinced ourselves that the driver was fine. They finally let the cars pass about thirty minutes later and we continued our way to Luang Prabang.

It was difficult for me to keep from getting car sick the entire seven hour drive of screeching tires and turns taken at mach speed, but I was very hopeful I would make it without throwing up since we only had an hour to go. As I tried to push away thoughts of my stomach churning, a smell of wet cat food wafted through the van. Before I could tell what happened, we had stopped again and the girl behind me began cleaning her seat, the floor underneath my seat, and her clothing.

She had thrown up so quietly that half of the bus had no idea. That being said, if you get car sick, I would suggest sitting up front with the driver, if possible, on this stretch of road.

Our first impression of Luang Prabang was that it is a very nice change of pace from Vang Vieng. It is a quirky city full of old buildings and outdoor markets. The city itself reminded us of Europe. And we were relieved not to find any sticky-floored cafes playing Friends or Family Guy.

In Luang Prabang you can find a plethora of nice cafes with a variety of cuisines and many of them including free wifi. Or you can seek out an Internet Cafe for just 100 Kip per minute (about 75 cents per hour). LP is sandwiched between two rivers.

We found that places to eat along the Mekong river are cheaper than the ones along the Mae Kok River river. A great place to eat breakfast is the Morning Glory Cafe with an assortment of teas, breakfast sandwiches and yummy pancakes.

We found a charming guest house on the Mekong river called Nama Vong for only 50,000 kip. Although, if it were up to our taxi driver, we would never had made it there.

He stopped twice telling us we were at the guesthouse and both times we told him he was incorrect. Then he tried sneakier tactics of telling us that Nama Vong had no vacancy. But luckily if you call their bluff enough times, they will eventually take you to your requested destination.

We settled into our room before we headed to get a Beer Lao and some free wifi. On our walk through town we ran into a couple who we had talked to briefly as we were stopped and waiting for the truck that drove over the edge to be pulled up. We made plans to meet them in the morning to share a taxi to the Kuang Si Falls.

Right next to our hostel that evening, we were able to join in on some festivities of a ceremonial “Washing of the Buddha”. Droves of locals gathered in the Wat Xiang Thong Temple to give their offerings and take part in this spiritual event.

The ritual of Washing of the Buddha celebrates the birth and enlightenment of Buddha. People approach the altar, fill a ladle with water or tea, and pour it over the figure to “wash” the baby buddha. 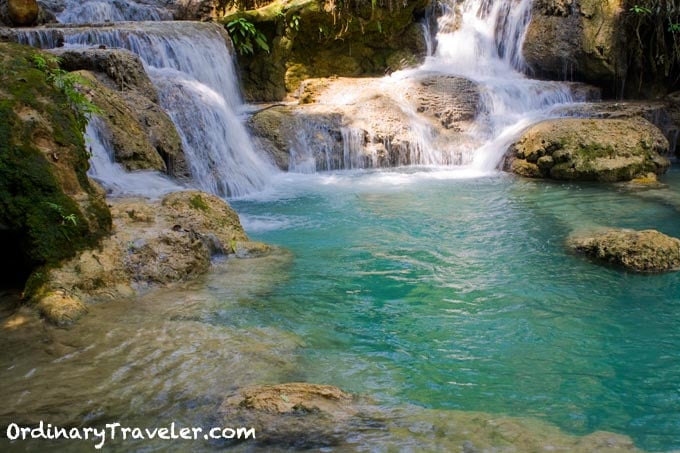 The Kuang Si Falls were definitely one of the highlights of our stay in Laos. Gorgeous blue-green water, places to jump off the falls, a rope swing and free fish massages (if you stand in the water long enough the fish will nip at your toes). Quite a change from swiming in the brown river in Vang Vieng.

Last but not least we strolled through the streets of Luang Prabang in the evening and feasted our eyes on local dishes throughout the popular street market. This is also a great place to purchase souvenirs. Don’t be afraid to haggle! We found an item we liked and the price started at $40 and ended at $8!