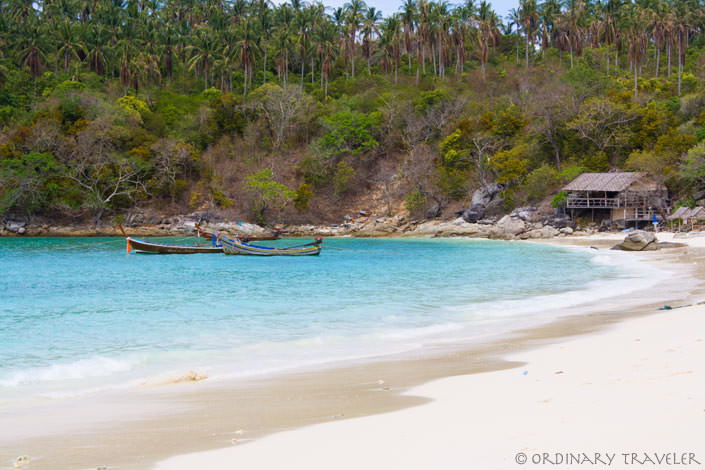 Thinking of going on holiday to Thailand? Working out when the weather will be the nicest (and therefore when to go) is one of the first things you need to do. My goal with this post is to give you a good grounding in the basics of Thai weather so you can make an informed decision about when to travel – without bogging you down in too much technical terminology!

To that end, this post is split up to help you find what you need. If you just want to get a feel for Thailand’s overall climate, ‘Fast facts’ is the place to go. I’ve also given you some information on when is the best time to travel to Thailand (and how to work out what that means for you!) as well as offering a few tips on the rainy season and beach holidays, before looking at some of the most popular holiday destinations in a bit more depth.

Let’s begin by looking at some general rules of thumb.

• Thailand can broadly be defined as having a tropical climate.

• Temperatures across the country vary little throughout the year, usually hovering around the 30 degrees C mark.

• There’s a north-south weather divide: The climate in the north of the country has three seasons, with the dry falling between November and May. This is then divided into two seasons, with March to May having higher temperatures and being classed as the hot season. The third season is the monsoon, which falls between May and November.

The climate in the south has two seasons, though these can arrive at different times in the east and west. The rainy season on the East Coast is between September and December, while in the West Coast it is from April to October. Outside of these times is considered the dry season.

When is the best time to travel to Thailand?

First of all, I’d like to stress that the definition of the best time to travel is quite a subjective thing, even though often people automatically equate this with the best weather. While weather can certainly be a factor, don’t forget to consider your personal schedule, what you want to do and your budget — all of which can affect your optimum travel dates.

In terms of weather, the best time to travel is usually between November and February, simply because across most of the country the weather is fairly dry and the heat isn’t too oppressive. This is the country’s high season in terms of tourism.

If value is what you’re after, though, you’re best off traveling between April and June, or from September to October. It’s generally more humid and rainy at these times of year — as well as having fewer hours of sunshine — but it’s also outside of the peak season, which means you can usually find some really tempting deals on accommodation. Plus, it’s also the perfect time of year to travel if you want to avoid the crowds.

When is the rainy season in Thailand?

As I’ve already mentioned, the rainy season in Thailand varies from region to region. As a quick recap:

Can I travel during the rainy season?

Yes! What’s more, there are several advantages of doing so – though, of course, if you have your heart firmly set on solid sunshine, then these benefits aren’t likely to sway you.

The first big advantage is price – because you won’t be traveling in the peak season, you’ll be able to choose from more competitive deals. The second is that you can avoid the crowds. The third is that the rainy season is quite unpredictable, which means there’s always a chance you’ll see very little rain at all — though you should remain prepared for downpours. Lower temperatures are another advantage worth considering, if you want to explore Thailand but are worried about how you’ll cope with the heat.

As a quick caveat, the rainy season does tend to be more humid, especially at night-time — just something to be aware of before you book.

When’s the best time to visit the beach in Thailand?

Most of Thailand’s beach resorts are in the south of the country, so as a rule of thumb you can base your decision of when to travel on the southern climate patterns. Below, I’m going to talk about a few of the most popular beach destinations, as well as cities, in a little more detail, which should also help give you a clear picture.

Of course, no doubt your instinct will be to avoid the rainy season (after all, most of us don’t imagine sunning ourselves in the middle of a downpour!), but remember what I said above — there are advantages to holidaying at this time of year. What I’d say if you have sunbathing in mind in particular is that it’ll often be a question of weighing up savings against how many hours of solid sunshine you’re after.

It’s also worth remembering that when temperatures soar in the north-east and center of Thailand (between March and May), the beaches in the south are generally a more pleasant temperature, because the mercury stays much more level here throughout the year.

The capital of the country, Bangkok is a firm favorite among culture vultures. In terms of weather, the rainy season generally begins between May and July and then lasts until November, with August and September usually being the wettest. The dry season then continues through to May, with the second half of this (from March to May) usually being the hottest period.

Chiang Mai is a northern destination particularly popular among trekkers, and it follows the northern climate pattern. The driest months are December to March, while the highest rainfall is in May, July, August and September.

Phuket is the name of both a province and an individual island within it that’s in the south-west of Thailand. Since it’s a really popular beach destination, you’re most likely to want to visit during the dry season, with the best weather falling between December and March. On the other side of the coin, September is usually the wettest month, followed by October and August.

Krabi is a beautiful province made up of more than 100 islands, which include the idyllic setting for the movie adaptation of The Beach. The dry season runs from November to April, though since December and January generally have the driest weather, this is when the islands are at their busiest.